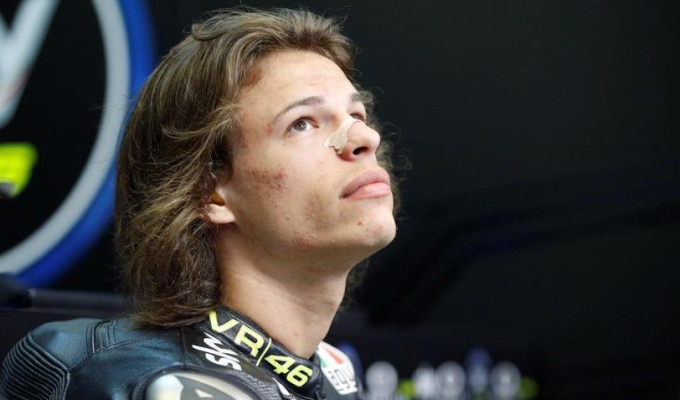 Coming into the 2017 Moto3 season, it looked like a battle between nations for the top crown. Italy vs Spain. Both nations are spoilt by young riders and the jewel in the Italy’s crown was said to be Nicolo Bulega.

The talented youngster burst onto the world scene on the back of winning the 2015 CEV Junior World Championship and lived up to his expectations ending his rookie campaign seventh overall. With some extremely quick pre-season times, Bulega was one of the early favourites.

However, eventful fourteenth and sixteenth place finishes in the opening two rounds in Qatar and Argentina respectively left the Italian 49 points behind his old Junior World Championship advisory Joan Mir. A fifth place in Texas was backed up by a seventh last time out in Jerez as he bids to kickstart his season now the paddock has returned to Europe.

Still just 17, GPxtra caught up with Bulega just before the race last weekend to find out how his 2017 season has started in his eyes.

GPxtra: How have you found the start of the season? Are you disheartened with the way the opening three races have gone?​

Bulega: I was expected a little be more from the first races of the season. I was fast during the sessions and also in qualifying, but I was not able to being in the front group during the race.

Thanks to the whole crew of the SKY Racing Team VR46 and KTM, in Austin I made a step forward and I’m happy. Also here in Jerez I was really fast in qualifying and I’m really confident for the race.

GPX: What needs to start happening for podiums and wins from this weekend?

NB: I have to be more constant in the results for being competitive in the Championship. For the race I need to reduce the gap with the Honda, but KTM is helping us with a lot of support, new parts and updates. For tomorrow it will be important find a good start and push for remaining in the front group.

GPX: What is the biggest difference from this season to last season?

NB: Compared to last year, the bike is similar. I think Honda made a great step forward, but as I already told you KTM is supporting us at 100%.

Also I think a lot of riders has improved during the pre season: there is a significant group of competitive riders in Moto3. Mir, Martin, Diggia, McPhee, Migno – a lot of different riders.

GPX: Despite only being 3 races into the season, the gap to Mir is 45 points, how confident are you that you can make that up and challenge for the title still this season?

NB: Moto3 is strange. We have 5/6 tops riders and all the races are decided at the very last corners. My primary goal is to recover as many positions I can in the standings. Top5 at the end of the year is my aim.

GPX: Being so tall you look more suited to a Moto2 bike, at what point would your attention turn to 2018?

NB: I know that I’m to tall for Moto3. But I want to keep concentrated on my goal – keep working on my bike with the Team, achieving points and important result. And then we will see what can happen in 2018, but it is not a priority think to the next year at the moment.

The Sky Racing Team VR46 and also the VR46 Riders Academy gave me this incredible opportunity to being competitive in Moto3 – so I have to stay focused on my goal. Compared to 2016, I made a great step forward thanks to them. Their help is fundamental in my growth path.