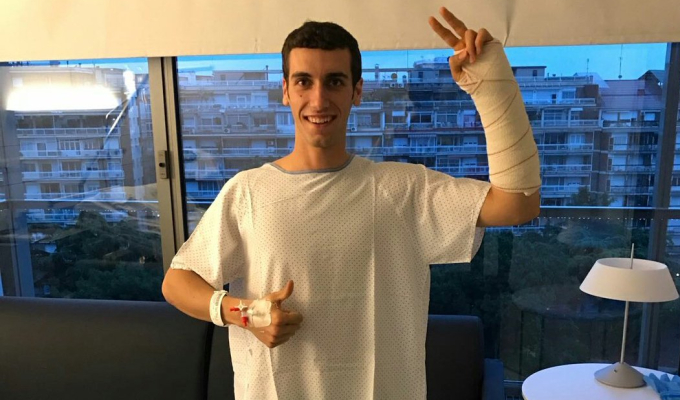 Alex Rins will miss the next six to eight weeks after undergoing surgery on his broken wrist back in Barcelona.

The rookie had his radius and ulna fractures stabilised this past weekend in Austin before travelling home on Monday and going under the knife with Dr Xavier Mir at the Dexeus University Hospital in Barcelona. Due to inflammation in his arm, surgery was postponed, but with surgery possible, two titanium plates were inserted and a 10-day rehabilitation period is now underway.

After the rehab period, Rins will have to miss between six to eight weeks, ruling him certainly out of the races in Jerez and Le Mans and possibly the sixth round of the season in Mugello. Rins should almost certainly be back in action for his home round in Barcelona on 11th June.

“The surgery went very well according to what Dr. Mir told me,” said Rins speaking after his surgery.

“I would like to thank him personally for all his care and attention since the fall in Austin last Saturday, him and all his team for care they have given me these days in hospital.

“The messages I have received through social media have really encouraged me, especially the kindness that has been shown by every member of Team Suzuki. This fills me with the energy and desire to immediately begin my recovery and return to competition as soon as possible.”

With Rins missing up to the next four races, Suzuki have announced that test rider Takuya Tsuda will replace him for as long as needed. The Japanese rider has had plenty of time on the GSX-RR already and will provide valuable support and feedback as Suzuki attempt to continue to move forwards as expected after 2016.