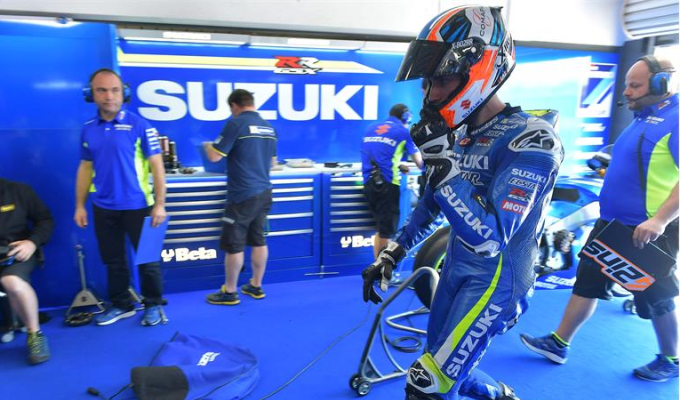 MotoGP rookie Alex Rins may be forced to sit out of the second round of the MotoGP season after suffering an ankle injury whilst testing near his home in Spain.

The 22-year-old fell from his training motocross bike. Whilst first thoughts were that the he had only bumped the ankle and the injuries were minor, further tests at the University Hospital Dexeus in Barcelona where a small fracture was found in his talus bone of the right ankle.

Rider favourite  Dr. Xavier Mir, Head of the Hand Unit, a top Orthopedic Surgeon, and Coordinator of the MotoGP Traumatology Service of the Unit Hospital Quiron-Dexeus was joined by Eugenio Gimeno, the Head of the foot, diagnosed Rins with a partial fracture of the right talus, without displacement, but with bone edema after a CT scan.

It’s been decided that the factory Suzuki rider will undergo non-surgical treatment with magnetotherapy and physiotherapy, before being reassessed in Barcelona on Monday once the swelling has reduced dramatically.

The timing couldn’t be worse for Rins who is due to fly to Argentina on Monday for the Argentinian Grand Prix at the Circuit Termas Rio Hondo, after finishing the season opener as top rookie ahead of Jonas Folger.