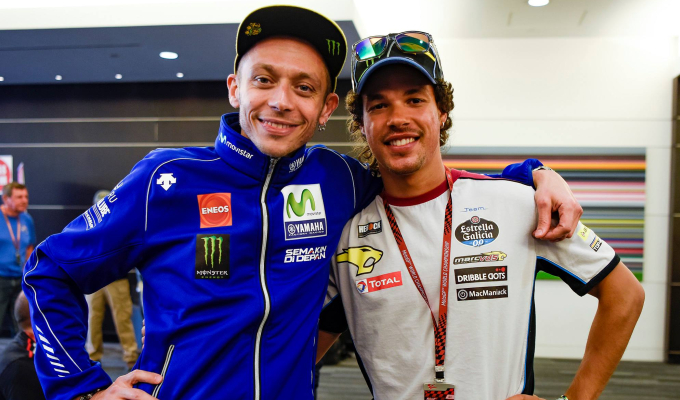 The Italian is currently sat at the top of the Moto2 standings by 19 points after winning all three of the races run in the 2017 season, leaving the rest of the field playing catch up. Morbidelli’s obvious talent and start to the season hasn’t gone unnoticed to MotoGP team bosses, with LCR Honda Team Owner Lucio Cecchinhello previously admitting he would like to sign the Italian next season, if at all possible.

Whilst possessing bags of natural talent, Morbidelli has spent plenty of time training at Valentino Rossi’s infamous Ranch in Tavullia. As part of the VR46 Riders Academy, he trains regularly with the nine-times World Champion as well as some other Italian riders including the likes of Lorenzo Baldassarri, Pecco Bangaia and Nico Antonelli as well as others.

The Riders Academy run flat track training around the ranch whilst also getting laps around Misano on Yamaha R6 and R1’s, as well as taking classroom lessons in things such as English, as the academy gives the young Italians all the tools to succeed as professional motorcycle racers.

Training with Rossi on a daily basis, Morbidelli compared the experience of training with him, as well as the guidance he receives from the Doctor, to that of a soccer fan training with Messi.

“Valentino is the strongest rider of all time and [to train with him] is fantastic,” the Italian told Spanish newspaper Marca.

“Training with him is like a child who’s passionate soccer fan training with Messi. Every day I learn so many things and I always take note of what he says.”