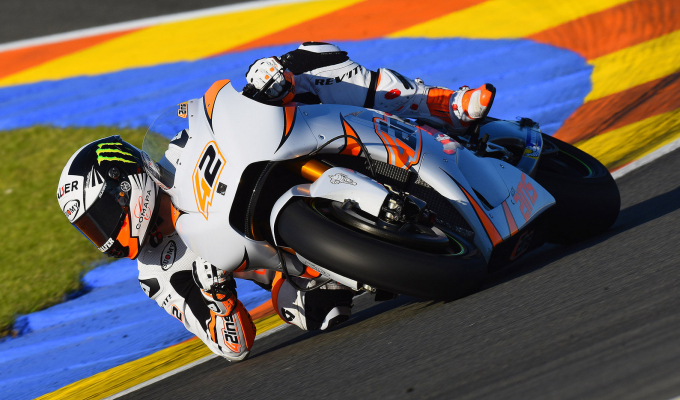 MotoGP rookie Alex Rins said that the pressure is on to better the results of the man he is replacing in the factory Suzuki team, Maverick Viñales.

The Spaniard was speaking alongside Toro Rosso F1 driver Carlos Sainz during a Estrella Galicia 0,0 event at the Moraleja Green Shopping Centre in Madrid, when he was was asked about his move from Moto2 up to MotoGP in 2017.

Rins was selected by Suzuki bosses over current factory rider Aleix Espargaro and two-time Moto2 World Champion Johann Zarco, in a huge leap of faith from the Japanese factory as the man to partner fellow new recruit Andrea Iannone for the next two seasons.

Despite the confidence shown in him by Suzuki, Rins did confess that he is aware of the expectation that he will have to perform at a level not too dissimilar to the man he was brought in to replace.

“I’m replacing him [Viñales] at Suzuki, and this, whether you like it or not, means that I have to try to get better results, which have not been bad at all,” said the 21-year-old via Motorsport.com.

“The pressure is on before even starting, but I hope to be there. It will be hard because there are more electronics and more things to keep in mind compared to Moto2. But in the end, every time I was on track with him we have been fighting. I’m not saying that I will be doing it in the first two races, but after moving to Yamaha he has adapted very quickly and has been very fast in Valencia and Malaysia, so I hope to get up to speed quickly.”

Rins’ preparations for his rookie campaign hit a snag when he fell, injuring himself during the post race Valencia test. He lost the front end of his GSX-RR at the fast right handed turn 12, injuring his back. He was forced to sit out of the subsequent Jerez test, but thankfully is now back and riding.

“I’m really recovered from the fall I suffered in Valencia in my first test with MotoGP,” said Rins.

“I’ve spent all this month at home wearing a corset, but now I feel stronger. In fact, last Thursday and I got on the bike to train and the back responded well.”

Despite limited track time on the Suzuki, Rins noted how much more physical the MotoGP bike was than his Moto2 machine.

“Now I only think of next year, the jump to MotoGP is a big change in my life in general. Every rider dreams of reaching the highest category and more of the hand of a factory team. In Valencia I got to try the Suzuki and to be honest the feelings were incredible. I used that test as an adaptation, to see how everything worked; so I came out with very little electronics on the bike. Even so, I noticed a big change from Moto2,” he said.

“The second day was when I fell, which was a shame because I missed the entire day of testing. Thankfully my first day in MotoGP was fantastic, I had some incredible sensations.”