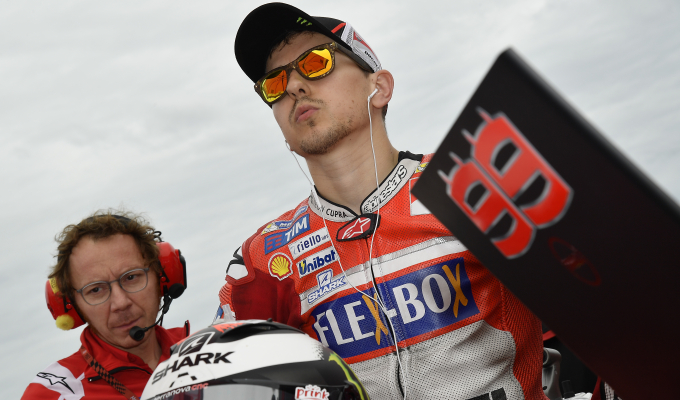 In spite of his tough start to the 2017 MotoGP season, Jorge Lorenzo believes that he and Ducati are on the right track to improve ahead of this weekends Grand Prix at the Circuit of the Americas.

The Spaniard has suffered a tough start to life with Ducati, an early mistake restricted him to an eleventh place finish in Qatar, before a first corner collision with Andrea Iannone in Argentina saw him crash out of the second race of the season.

Lorenzo said that he is eager to get back on his Desmosedici in Austin and to put his crash in Argentina behind him for good.

“Finally we have arrived at Austin, and I just couldn’t wait to get here after my crash at Termas de Río Hondo,” said the five-time World Champion. “I don’t want to think about what happened in Argentina anymore.”

Despite not being able to show his true race pace thus far, Lorenzo believes that he and Ducati are on the right track moving forward and will be hoping for an uneventful race this weekend.

“Even though the results up until now haven’t gone our way, I think we are on the right track to improve. Unfortunately for one reason or another, I haven’t been able to demonstrate this,” he said.

Whilst Marc Marquez has won all four previous races at COTA, Lorenzo called the American track “a great circuit” and is excited to see what he can do on a track the Desmosedici has historically gone well, as he continues to adapt to the Ducati.

“Austin is a great circuit, one where I have never won, but Ducati here has always been competitive and has been on the podium in the last three years. It’s a good track to keep on developing the Desmosedici and adapting my riding style,” said Lorenzo.

“In the team we are all optimistic, we’re working well together and I’m sure this difficult moment will be over soon.”

One thought on “Lorenzo: I believe we’re on the right track to improve”