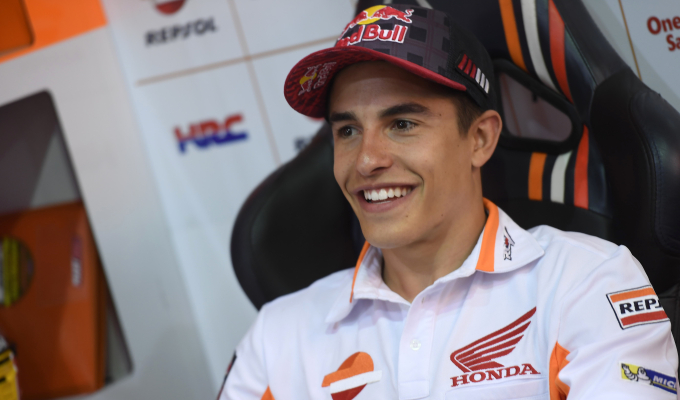 The Italian is currently sat 14 points behind his team-mate after two rounds and despite Marquez being 37 points behind Viñales, Marquez has said that Rossi will be doing anything but helping Viñales secure a maiden MotoGP World Championship this year.

“I don’t think we’ll Rossi working to get Viñales the title,” Marquez said laughing whilst speaking in the thirteenth edition of Relatos Solidarios. “At the end of the day, all riders want to win. We all know the first rule of motorcycle racing, your first rival is your team-mate. All riders, from the first to the last, we all have a winning mentality, that’s why we’re here and everyone wants to win.”

Since wrapping up his third MotoGP title in Japan last year, Marquez has suffered his worst run of results in MotoGP, failing to win in five races, crashing out of three of them. Whilst two of them were in Australia and Malaysia last year with the title already in the bag, the crash last weekend in Argentina would prove a lot more costly.

Marquez said he is not surprised by the start Viñales has made to life at Yamaha, but he is surprised to find himself so many points Viñales after just two races.

“Maverick’s debut has been unbelievable, the perfect debut. But it was something that everyone could predict a little, this is how it was in the preseason,” he said. “What I didn’t expect was mine to begin like this. But there is a lot of time and I can turn it around. We’re a sport of fighters and we are going to try to change things.

“There are now many rivals, I’m eighth in the championship, I have seven rivals ahead of me! But it does seem that the two Yamaha riders are the ones who are the strongest and will make things more difficult.”

Marquez said that he has used his one “wildcard” early in 2017 and will need to keep mistakes to the bare minimum if he is to have any chance to retaining his crown this season.

“Mistakes are always expensive. A season is very long and you always end up making a mistake. I have used my wildcard very early this year, in the second race. Now I must have the mentality to finish the races and keep adding, as I have until now, but without using anymore wildcards.”

Leave a Reply to Gathering it up Cancel reply