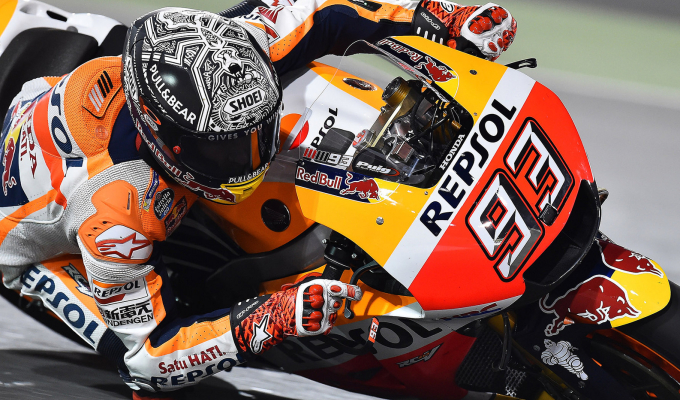 Reigning World Champion Marc Marquez has said that he is 100% fit and motivated heading into 2017 as he bids to win his sixth World Championship.

Still just 24-years-old, the Spaniard already has five World Championships, including three MotoGP crowns in his pocket, however that isn’t stopping him from wanting more as he bids to become the most successful rider in modern history.

Despite a pre-season filled with ups and downs, including a final night of testing which saw him fall three times in Qatar, the World Champion is confident that he can fight for a podium, insisting he is motivated and ready to fight for another title.

“We come into this season better than last season, but this does not mean that the result will be better,” said Marquez.

“What is true is that we have prepared well. Physically I am at 100% and mentally I am also very motivated, as always, to try to fight for the title for another year.

“On a technical level I always want more; everything’s never perfect and we always want to be better,” he said.

“Seeing how we were when we started the preseason, I think we have reached an optimum level to fight for the podium from the first races.”

Marquez ended the final pre-season test in Qatar in eleventh fastest overall, with his fastest lap 0.660 from the best time of the test set by Maverick Viñales. Despite being so far down the timing screens in Qatar, the World Champion won’t rule out victory in Qatar with another three evenings of free practice and qualifying before the season gets underway.

“We’ll see. We have all the Grand Prix weekend to finish preparing things, but we are starting out at one of the circuits that we have found more difficult, and that is perhaps less favourable for the characteristics of our bike,” said Marquez.

“However, we do not have to rule anything out and we will start with maximum motivation and ambition to see if we can fight for victory from the beginning.”

With regards to his rivals for the 2017 World Championship, the Spaniard noted Rossi, Viñales and Pedrosa, whilst also mentioning Lorenzo.

“More or less the same riders as every year will challenge. Rossi, Viñales and Pedrosa –who has had a very consistent preseason,” he said.

“We’ll see with Lorenzo, because he can have good races and the mystery is whether he can be fighting for the podium every Sunday, which will indicate if he can aspire to win the World Championship.”

One of the biggest factors in Marquez’ 2016 title was he consistency and his view of the bigger picture rather than a ‘win it or bin it’ mentality. With that in mind, Marquez said that will aim to be consistent again, focusing on the title rather than each race.

“As I always say, it depends on every situation. If I am ready, I will give one hundred percent. If not, we will try to handle things in the best possible way,” said Marquez.

“One of the lessons I learned in 2015 and used in 2016 is consistency, although there are times in the season where you have to take a little more risk.”