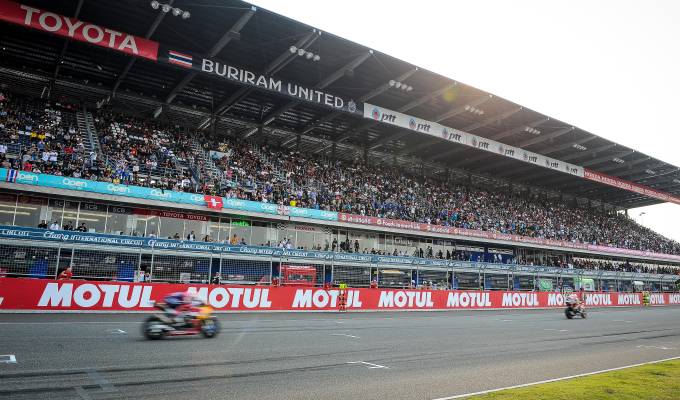 Thailand looks set to be the latest country to be granted a MotoGP race for 2018, with the Chang International Circuit the venue.

According to the German website Speedweek.com, the Thai circuit in Buriram has officially signed a deal to join the MotoGP calendar as the nineteenth race on the 2018 calendar.

The Chang International Circuit has now hosted three years of World Superbike races and that contract looks like it will continue alongside the MotoGP contract after proving they’re capable of hosting a MotoGP race over the three year period.

One of the final stumbling blocks that needed clearing was around the sponsorship of the circuit. Chang in a local brewery who are the title sponsors of the circuit. In recent years, MotoGP have been sponsored by the main competitor Singha, but it is reported that a compromise has now been found between the two sides.

The Kymi Ring in Finland was signed to be on the 2018 calendar, however construction delays now means that the track won’t be ready and will be pushed back to 2019 where they will be faced with competition by new circuits in Indonesia, Kazakhstan, Chile and Mexico.

Whilst not all of the circuits bidding for a round will get approved, it could see the MotoGP contract continue to shaken up over the coming years after the Termas de Rio Hondo in Argentina was added in 2014 and the Red Bull Ring in 2016.

Of the circuits with their metaphorical heads on the chopping blocks, the Circuit of the Americas and the British round appear two of the biggest names that could be in danger. Since moving to COTA, attendance hasn’t been huge in Austin leaving organisers debating the benefits of the round. Whilst the uncertainty of the Circuit of Wales who hold the rights to the British round could see Dorna bosses loose patience and withdraw a British round all together. There is always the possibility of a Spanish round also making way with four rounds continuing to be scheduled in for Spain.

No dates have been confirmed yet, although series organisers are weighing up the benefits of adding it as a fourth flyaway alongside Malaysia, Japan and Australia or having it later in the year. Should it be scheduled later in the year, it would avoid any WSBK clashes, also meaning it could potentially replace Australia in October, leaving Phillip Island to be moved much closer to the start of the season to increase chances of getting good weather at the historically unpredictable circuit.

The Thai market is a huge one all MotoGP factories are eager to get to Thailand with South East Asia continuing as one of the biggest markets for motorcycles in the world with over 1.5 million motorcycles sold in Thailand in 2015. With over 80,000 fans attending the three days of the WSBK event and the circuit holding 50,000 on race day, the fan support in Thailand would be huge.