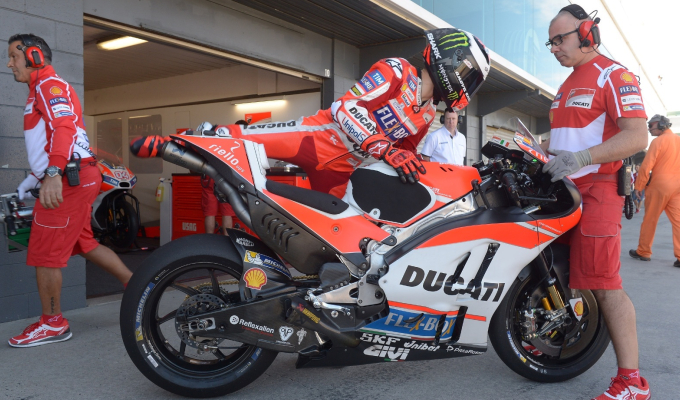 Jorge Lorenzo and Andrea Dovizioso were back in action in Southern Spain today, completing a one-day private test as they continue to work with the 2017 Ducati GP17.

The duo headed straight to Spain from Qatar, where they took advantage of the first of their five private testing times. Yamaha blocked Lorenzo from running in the private test in November, so Ducati decided to keep the testing day in their pocket to use this week.

The Ducati factory duo suffered very different fortunes. Lorenzo was greeted with the harsh reality of life on the Ducati as he could only struggle to eleventh position whilst remaining largely uncompetitive all weekend.

Insisting he will do the work required to remain a title challenger with Ducati, despite no times being leaked from Ducati, the Majorcan completed 82 laps around Jerez, the majority of which was with the standard fairing, although the “hammerhead” fairing that debuted during the final pre-season test did make an appearance.

Whilst the verdict remains very much out on the new fairing, Ducati are hopeful that they can take something from it as they continue to work in a bid to find the downforce lost with the ban of the winglets.

Dovizioso enjoyed a very different weekend in Qatar, finishing runner up at the season opener for the third year in a row. The Italian completed 51 laps himself, again largely with the standard front fairing, but much like his teammate he did trial the “hammerhead” option.

The duo also gained valuable information ahead of the fourth round of the season when the entire paddock will return on the 7th May, at a circuit that Ducati historically struggle on.