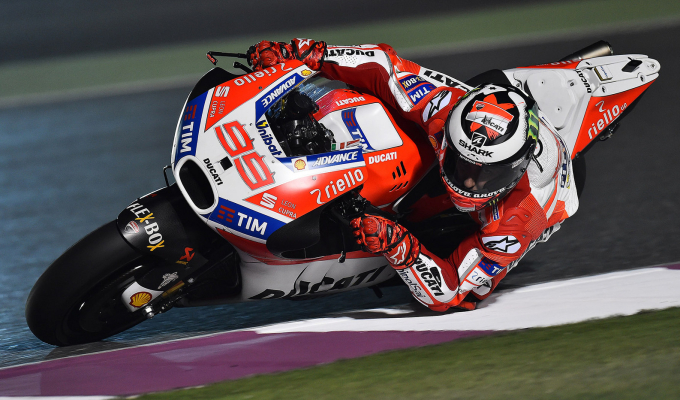 Three-time MotoGP World Champion Jorge Lorenzo has said that he wants to achieve something “really difficult, worthwhile and important”, as his motivation ahead of his Ducati racing debut next weekend.

The Spaniard made the highly publicised and talked about move from Yamaha to Ducati at the end of the 2016 season, with him motivated to start again with a new team.

Ducati bosses have been very vocal in saying that believe that that Lorenzo is the missing piece in their championship puzzle. With that in mind, Lorenzo said it would be huge if for everyone at Ducati, including himself, if he were able to secure Ducati’s first World Championship since 2007.

“It would be a very big thing if I could do that. It would be massive for everyone, for Ducati and for me,” Lorenzo told Spanish daily newspaper Marca.

“However, I like a challenge and I like trying to do difficult things. I’ve done many of them during my career and I want to do so again. I do want to do something really difficult, worthwhile and important before my career ends, which I hope won’t be for a long time.”

Yamaha prevented Lorenzo from taking part in a private test in Jerez, but despite not getting the chance to get on his Desmosedici until the very end of January in Sepang, he did admit that he spent time on the phone with multiple different people from Ducati through the winter.

“I speak very little on the phone, but when I do, it’s always about work,” he said. “So, I’d be that the phone with Gigi and or Christian Gabarrini (his crew chief) it’s been them the most.

“But I also talk with (Michele) Pirro and a different mechanic named Marco Palmerini, who I know him from the days of Derbi and Aprilia, I am very much in touch with him.”

After denying Lorenzo the chance to test in Jerez and with his move to Ducati official, Yamaha Team Director Massimo Meregalli took a parting shot at Lorenzo, claiming that Viñales was as good, but had improved the atmosphere in the team.

Lorenzo said that he wasn’t by Meregalli’s comments, in part due to his relationship with Valentino Rossi.

“I don’t think that was a very wise thing to say from someone like him. He is someone who has always been very much on the side of Rossi, for one reason or another,” explained the 29-year-old.

“I always understood that but tried not to worry about it too much because he was my teammate but I’m not surprised that he said it after I left the team.

“With Rossi, Yamaha had someone who is an icon in motorcycle racing and who sells many bikes for them so they had to take care of him. It came to a point where both of us were fighting for the championship and that made things difficult. It wasn’t an easy situation.

“But I understood that they had to take care of their diamond, in the sense of selling motorcycles so it was difficult to treat us equally but I’ve always been aware of the situation.”

Lorenzo’s had an indifferent pre-season with finishes of tenth and eighth in Sepang and Philip Island respectively, before ending the pre-season schedule with a fourth place in Qatar.

It appears as if Ducati are taking 2017 on a track by track basis, with Lorenzo admitting some circuits making challenging for victory might more possible than others.

“Well it depends on what circuit,” said Lorenzo. “At Phillip Island we suffered a lot. The 2016 and 2017 Ducati’s suffered a lot, even Barbera and Baz went slower than they did on their 2014 bikes, which is a bit strange, because normally the newer ones go much better.

“I think in some circuits we can do very well, and we’ll try to win more races than last year, where we got two. But, to make a complete bike for all circuits, and to hope of winning the championship, we don’t know how it will go.

“But for now, we have to think in the short term, because we want to do it right from the beginning, but maybe it will be a longer process than I thought.”

Being a five-time World Champion means Lorenzo won’t be totally happy unless he is winning, but did acknowledge that there are other factors within a team which can factor in.

“If you are asking if you can be happy without winning, it is more complicated,” he said.

“But there are other aspects to being a racer and being part of a team where you are happy can compensate for negative results.

“But hopefully that won’t be the case. Year after year, or during the season, I believe that we will improve and win races. If we can do that, which we are confident we can, then it will bring us closer to our goal of being champions.”

One thought on “Lorenzo: I want to do something really difficult, worthwhile and important”