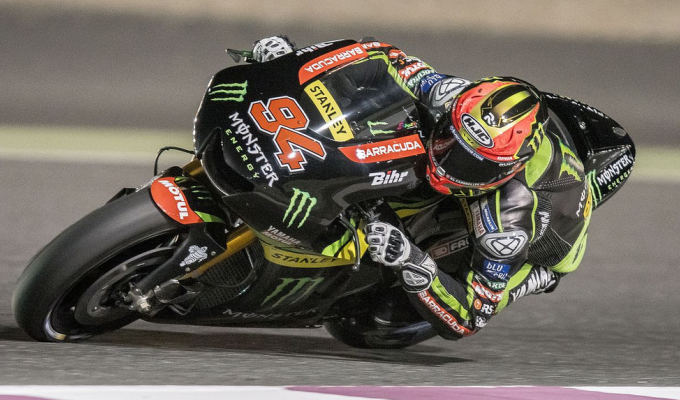 Arguably the biggest surprise star of pre-season testing Jonas Folger has said that he is ready ready to start the season.

The German rookie joins the Monster Energy Tech3 Yamaha team for this season and made a lot of the more established MotoGP riders sit up and take notice with extremely impressive tests in both Phillip Island and Qatar where he finished fourth and eighth respectively.

After completing the Qatar test, Folger said that he was happy with his progress, including the race simulation from the final evening.

“The team and I kept the momentum going and completed another positive test here in Qatar and now I think that we are ready to start the season,” said the 23-year-old.

“Our priority today was to run a race simulation which we did at the end and this was very good for us because I ran some really consistent lap times and the engine mappings that we prepared, worked as we expected them to.”

As well having to learn and adjust to the much heavier and quicker 1000cc MotoGP machines, Folger has had to learn how the Michelin tyres wear through a MotoGP race.

“It was interesting to see how the tyres performed and I gained some solid experience so now I have more of an idea about what to expect in a Grand Prix,” he said.

“Throughout this test, I have learnt a lot and I have built up more confidence with the bike again, especially in the simulation, where I rode safely.

This was very important because the fall at the Phillip Island test when I was doing a long run made me lose some confidence. Now I understand the Yamaha better, particularly when the conditions are changing and I can adapt well.”

When asked what he hopes to achieve when the season begins next weekend, Folger said he will take it as it comes, but he is happy with his winters work overall.

“We will see what I can do on the race weekend because it’s a different story altogether when compared to testing but overall, the team and I can be very happy about the preparation that we have done this winter.”