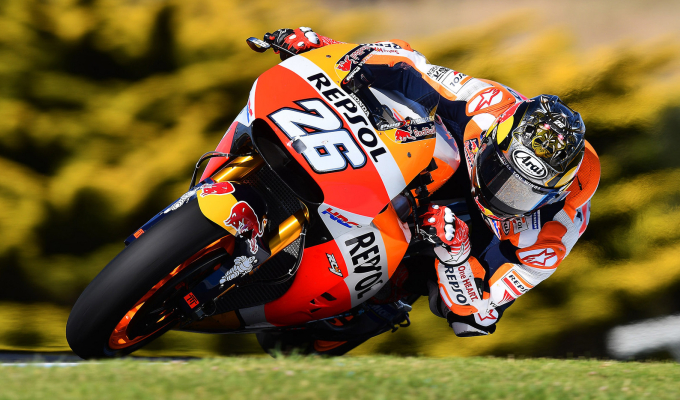 Dani Pedrosa has said that the great unknown of 2017 is how Maverick Viñales will handle the pressure of being a MotoGP title contender.

The 22-year-old Spaniard has been in blistering form through pre-season topping all of the pre-season tests thus far. Whilst Pedrosa has had a very good, if not somewhat under the radar pre-season which saw him, in third place in both Qatar and Phillip Island, backing up from a fifth position finish in Sepang.

“I see the usual candidates, but with the unknown of how Viñales will handle the pressure of being a contender,” said Pedrosa. “It’s different being a surprise winner, to being obliged to win.”

Two of the biggest off-season moves were Viñales’ move to Yamaha and Jorge Lorenzo’s move from Yamaha over to Ducati. Whilst Viñales enjoyed an almost perfect pre-season, Lorenzo had issues of his own.

Pedrosa said that he hasn’t been on track along with neither Viñales nor Lorenzo since their respective moves, saying that they are focused on their own test schedule, whilst acknowledging their times show they’re competitive.

“I have not coincided with them yet because we are very focused on our work. But their times indicate that they are strong,” he said.

The 2017 RC213V will debut a new engine, with a bid to finally fix the power delivery issues that have plagued the Honda riders for the last couple of years. Pedrosa knows that his bike still has a lot of work to be done, but is confident that he can find the optimal setting.

“A bike is always evolving. It’s about looking for the balance between bike and rider, and that’s where we are, with more and more connection between both,” he said.

“I’ve always had a good connection with Michelin. Despite the initial problems with adaptation, we are constantly improving.”

Pedrosa was asked what he has learnt from sharing a garage with Marc Marquez for four years, Pedrosa was unclear but responded in good humour.

“Many things,” he said laughing. “I’m very observant, but I’ll keep that to myself.”