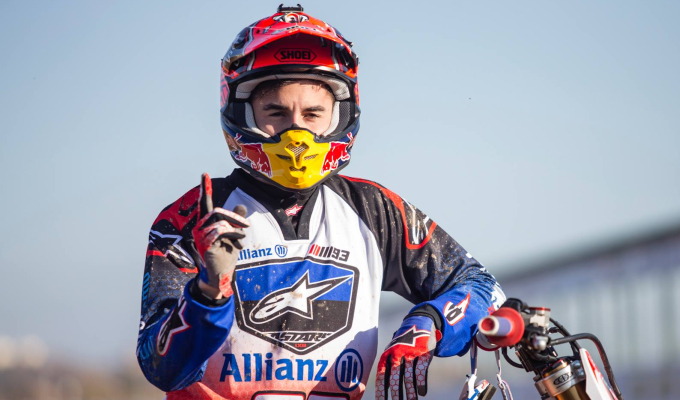 The World Champion welcomed Sky Italia to his Rufea home as he hosted the Allianz Laps for Life event earlier in December. Whilst there, the Spaniard spoke at length about an array of subjects, including his title rivals next season.

Two of the biggest changes in 2017 will see Jorge Lorenzo leave Yamaha and join Ducati, and in his place will come Maverick Viñales. Both riders made their debuts on their respective bikes in Valencia, showing impressive speed from the off. Marquez admitted he was surprised at the speed of Lorenzo, but doubts whether his compatriot can win a fourth MotoGP title next season.

“I didn’t expect Lorenzo to be so quick at Valencia. He’ll be able to win races,” said Marquez. “But I don’t know [if he can fight for the title], it’s too early to say. Lorenzo could win some races, maybe even the first, but I’m not sure about the title.”

Not sure if Lorenzo can win the title, Marquez is sure that his replacement at Yamaha, Maverick Viñales can.

“I did think Viñales would be this fast, he’s already proved that at Suzuki. After two years that haven’t been easy, you’re stronger when you get on a complete bike, like the Yamaha. He’ll be fighting for the title right from the first race,” he said.

“I can see Viñales in the fight, as well as Rossi. Over the last year Vale and Maverick have proved to be strong.

“I like Iannone, because when Andrea’s around, there’s always a good fight. He’s very aggressive, we need a rider like that. Also, at Valencia, he was only two tenths from my Honda.”

With regards to his own preparations for 2017, Marquez said he doesn’t know where he is with his new RC213V.

“I don’t know, at about 80% I think. We need to find that missing 20% over the final test days in order to be fast at first race in Qatar,” he said.

Last season saw Marquez and Rossi shake in Parc Ferme after the Catalan GP which Rossi won. It was just two days after the tragic passing of Luis Salom, and Marquez thinks the handshake lifted some of the tension between the pair.

“The world championship was going through a hard time due to Salom’s passing. After that race, the atmosphere at the track was different, there was more professionalism,” said Marquez.