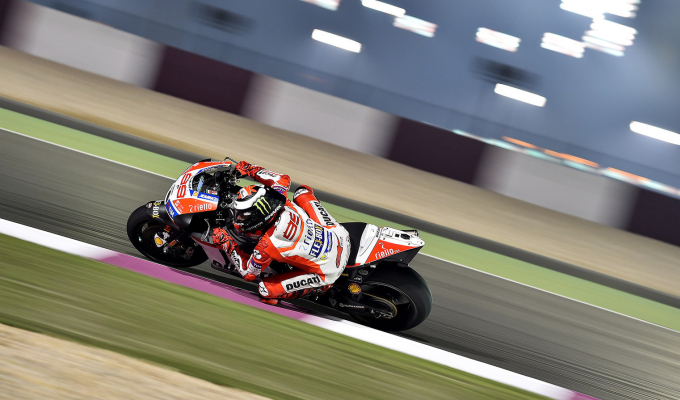 Jorge Lorenzo has said that he leaves Qatar optimistic confident for his chances for the first race of the season after the final pre-season test.

The Spaniard ended the final test with the fourth fastest time overall, a 1:54.519, less than two tenths behind the fastest time set by his Yamaha replacement, Maverick Viñales.

As well as working on front end feel of his Desmosedici, the Spaniard also debuted the new Ducati aerodynamic front fairing for a few laps, although he didn’t complete his fastest lap with the new fairing.

Lorenzo said that he is very happy with how the test ended, although he knows how much work still needs to be done before the lights go out on race day in two weeks time.

“Today was a much more positive day than the first two,” said the 29-year-old. “In general things went very well and I achieved my best position in the three official 2017 tests.”

The Spaniard also identified the tyres choice as a pivotal decision that needs to be made come race weekend. Despite doing longer runs on the soft tyres, Lorenzo isn’t sure it they will with stand the full race distance.

“We upped the pace quite a lot and I also managed to set some good times, but we still have to work on the race pace and, with the GP in mind, also decide which tyres to use,” said Lorenzo.

“We still have a lot of work to do, but on this track I think we can score a good result and so I’m leaving Qatar optimistic about the first race.”