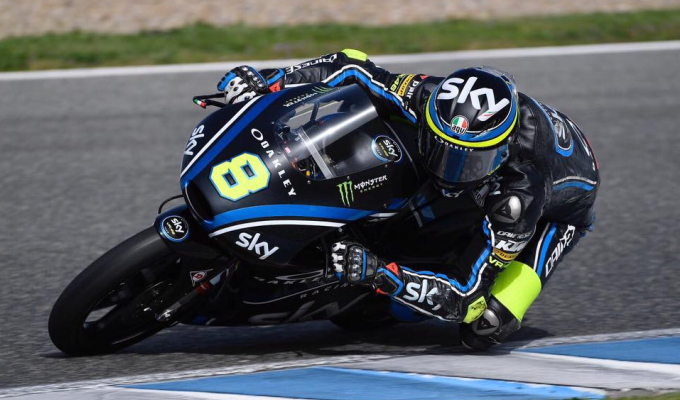 Nico Bulega topped the first official Moto3 test in Jerez, reaffirming his title credentials ahead of the 2017 season.

The Team Sky VR46 rider topped the final two days and the overall test by just a tenth of a second ahead of fellow second year rider Aron Canet on his Estealla Galicia 0,0 Honda and Jorge Martin on the Gresini Honda who was less than a tenth behind his compatriot.

The experienced Jakub Kornfeil was an impressive fourth place on his Saxoprint Peugeot just ahead of the highly anticipated returning Romano Fenati who was fifth on his Snipers-Ongetta Honda.

Marcos Ramirez, Gabi Rodrigo, Juanfran Guavera and Joan Mir were all within half a second of Buelga’s lap time. Whilst British Talent Team rider John McPhee completed the top ten.

Bo Bendsneyder was eleventh whilst the experienced Italian duo of Nico Antonelli and Enea Bastiniani were 16th and 18th respectively as they adjust to their new bikes.

The second and final official Moto3 test will be in Qatar next week, a week before the season opener at the same venue.