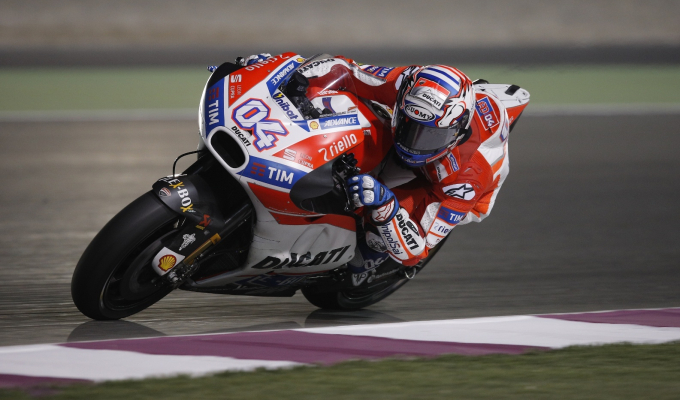 Andrea Dovizioso topped the first day of the final preseason test at the Losail International Circuit, breaking the race lap record in the process.

With Ducati struggling in the Sepang and Phillip Island test, having issues with the front end of the Desmosedici due to the banned winglets removed, they were hoping for a strong showing in Qatar. Thankfully for Ducati, the first night in Qatar was what they had hoped for. Dovizioso, who has been on the podium the last two years in Qatar, wasted little time in laying down an early marker, a 1:54.927 which was better than his new team-mates race lap record.

Ducati were rumoured to have new aero package with them in Qatar, with their own unique hidden winglet package which didn’t make an appearance last night, although we may well see the new package tomorrow night.

Fastest man through the three pre-season tests thus far, Maverick Viñales was second fastest, during another impressive session aboard his Yamaha YZR-M1. Viñales’ best time of a 1:55.179 was just over three and a half tenths of a second off of Dovizioso’s time, but it was another impressive showing from the 22-year-old.

Third place and top Honda was that of Cal Crutchlow. The LCR Honda man worked in the aggressive manner we have become used to with the Brit and his best lap time was a further couple of tenths behind the best time of the Spaniard.

The biggest shock of the evening was fourth placed man Karel Abraham. The Czech rider making a return to MotoGP with the Aspar team claimed a stunning fourth fastest time which was a tenth faster than fifth placed Jorge Lorenzo who produced his most impressive display to date on the Ducati. Lorenzo’s best time of the evening was just seven tenths of a second behind his team-mates which left the Spaniard encouraged.

Jonas Folger was sixth fastest and fastest rookie at the same time, finishing one place ahead of Valentino Rossi on his satellite Yamaha. The Italian hasn’t enjoyed the strongest of pre-seasons and knows there is work to be done ahead of the first race of the season in two weeks time.

Dani Pedrosa was eighth fastest and he, along with team-mate and World Champion Marc Marquez were debuting a new aero package. Whilst Pedrosa was slowly adjusting to the new engine on his Honda, Marquez could only muster the 12th fastest time, suffering two crashes in the process, including one on the first lap with the new aero faring.

Two-time Moto2 World Champion Johann Zarco was ninth fastest whilst Andrea Iannone rounded out the top ten whilst suffering a fall of his own.

Danilo Petrucci was eleventh fastest on his Pramac Ducati ahead of Marquez, Aleix Espargaro, Jack Miller and Scott Redding.