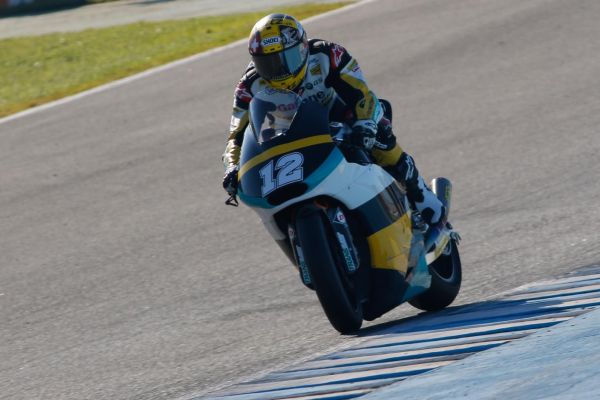 Tom Lüthi and Nico Bulega topped the opening day of official testing for Moto2 and Moto3 respectively in Jerez.

The first session of the day saw the Moto2 officially begin their testing programme at 10am this morning and it was a fantastic first day for Swiss rider Tom Lüthi. Lüthi topped all three sessions throughout the day with a best time of a 1’42.874, which was 0.476 seconds faster than the 2015 Moto2 pole time around Jerez.

The Interwetten rider usually goes well around Jerez, and despite the colder conditions the first day of official testing went very much to plan.

Behind the Swiss rider, Sam Lowes continued to impress on the Gresini Kalex, just 0.118 slower than Lüthi’s best time of the day. Takaaki Nakagami was third ahead of Alex Rins, Alex Pons and reigning World Champion Johann Zarco.

Reiging Moto3 World Champion Danny Kent was 15th fastest and just 1.177 behind the fastest time of the day as he continues his adaptation to the Moto2 machine.

In the Moto3 class, it was the 2015 CEV Repsol Moto3 Champion Nico Bulega who topped the timing sheets. The Sky Racing VR46 rider is a class rookie, although has completed a lot of laps of the Spanish circuit.

His best time was a 1’46.785 which was just six thousandths of a second faster than the Moto3 pole position time from 2015.

Bulega lead compatriot Nico Antonelli by just over a quarter of a second, with Jorge Navarro, Enea Bastianini and Philip Oettl not far behind the Italian duo. Fabio Quartararo – now with the Leopard KTM team – was sixth fastest just faster than Brad Binder, Romano Fenati, Peco Bagnaia and another rookie in Joan Mir.

Scotsman John McPhee aboard the new Peugeot Moto3 machine was 23rd fastest, 1.8 seconds behind Bulega’s fastest time of the day.

Both paddocks will begin their second day of testing tomorrow where conditions are meant to be equally sunny, but warmer than conditions today.