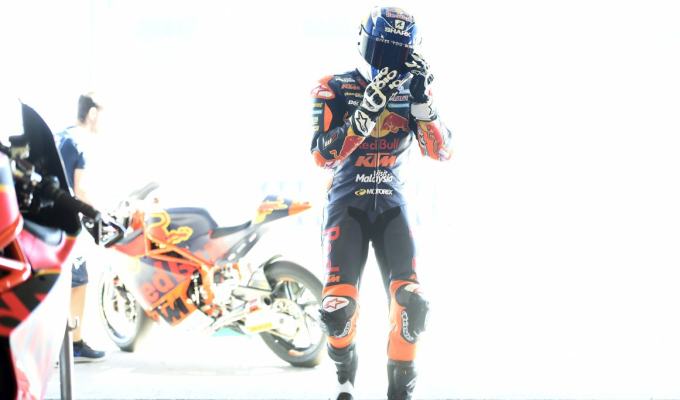 Portuguese rider Miguel Oliveira topped the first day of official pre-season test in Jerez on the debut of the KTM Moto2 machine.

The Red Bull Ajo rider posted impressive times throughout private testing earlier in the winter and when the full paddock joined to mark the start of the Moto2 year, the Portuguese rider laid down an early marker as he prepares to start his second season in the intermediate class. Oliveira’s fastest time of a 1:42.316 would’ve put him on pole position for the 2016 Moto2 race at Jerez.

Perfect weather conditions greeted the riders in Jerez who had three 70-minute sessions on the first day to work on their 2017 machines. Japanese rider Taka Nakagami posted the fast time of the morning session and ended the day second fastest behind Oliveira. Italtrans’ Mattia Pasini joined Oliveira and Nakagami as the only riders to post a lap under the 1:43 mark.

There were a few notable absentees on the first day of testing with Italian duo Lorenzo Baldassari and Stefano Manzi missing out due to an inflamed tendon and a knee injury respectively.