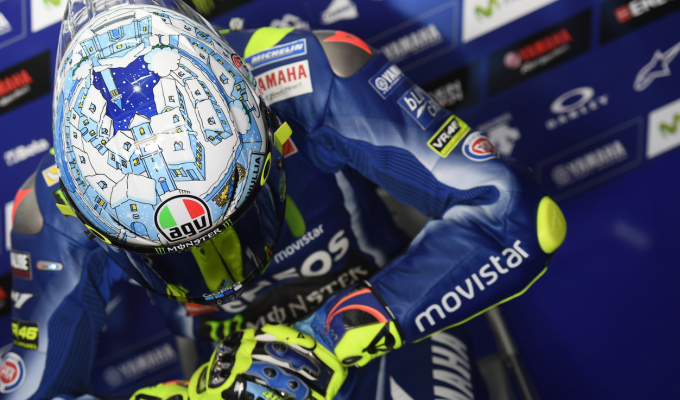 Valentino Rossi has said that his dream for is to win a historic tenth World Championship, whilst also reiterating his desire to one day become a father.

The Italian who turned 38-years-old earlier this month has everything he could ever want confessed that a son is one thing he has yet to have but would like in the not too distant future. In an in depth interview with Italian publication Corriere della Sera, Rossi discussed a range of topics from MotoGP to Italian politics.

When Rossi was asked his dream, Rossi revealed both his professional and a personal dream of his.

“To continue to win, to be there, to be in the mix, to try for the tenth title,” said the Doctor.

“And a son; I would like to have a child and this seems like the right time.”

When it was pointed out to him that becoming a father be a struggle as he is currently single, Rossi responded in an usual manner.

“That is basically the problem,” he said. “I guess I need to rethink my strategy!”

One of the most defining moments in Rossi’s career will be the infamous ending of the 2015 season. Without getting into too much depth around the incident, Rossi said that he is still very upset about the manner in which the season ended and that he regrets opening the can of worms in the Malaysian press conference 18 months ago.

“A very deep disappointment. Some things happened that should not happen, a disgrace to the sport,” said the Italian.

“I have battled against tough rivals, various adversaries, from Biaggi to Stoner, but none of them every behaved like Marquez did then. I have never seen a rider who was not in the running for the title race against someone else like that.

“Do I have regrets? Of course. If I hadn’t said anything… if I hadn’t reacted… The truth is that they would have beaten me anyway and at least I got it off my chest, I created a stir.”

When asked about the two Spaniard’s, Rossi said that Lorenzo is a lot less “false” than Marquez. He also said that his new team-mate Maverick Viñales is more “balanced” than Lorenzo, before saying he beleives that people show their true person under stress.

“Lorenzo, for better or for worse, is more transparent than Marquez, less false. Viñales seems to me to be more balanced than Lorenzo. Then we will have to see if he can handle the tension, if he will change under stress,” he said.

“Of course, maybe on the track I won’t even see him, given how fast he was in the tests. But people reveal themselves under stress. Anyone can be a perfect gentleman with the bikes switched off.”

Rossi was also asked about the recent early retirement of Formula One World Champion. Nico Rosberg, of course shocked the motorsport world when he announced a week after becoming World Champion he was stepping away from the sport. As the total opposite to what Rossi has done throughout his career, he admitted he was baffled by the decision.

“I’m baffled. I don’t like and don’t understand it,” he said.