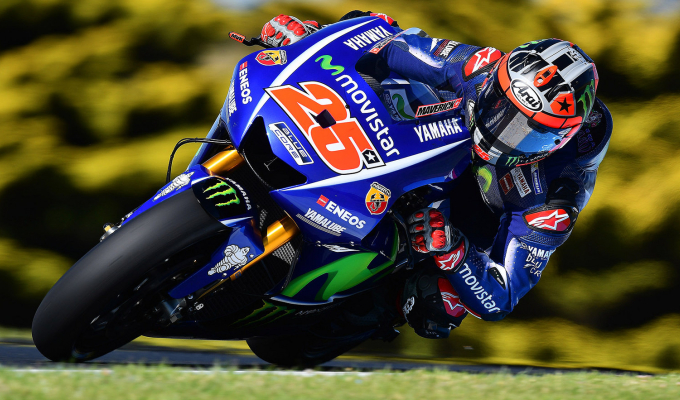 Maverick Viñales said that he took a big step forward on the second day of the pre-season MotoGP test in Australia, as he topped the timing sheets down under.

The young Spaniard came to Phillip Island with the fastest laps in both Valencia and Malaysia and looks as if he may add Australia to the list as he lays down a marker ahead of the 2017 season.

It took Viñales a little over an hour to become the first rider of the test to post a lap below the 1:28 mark, before completing his fastest lap of the day, a 1:28.847, on his 21st, 0.462 seconds ahead of his closest challenger.

With his fastest lap in the bag, Viñales spent his remaining 59 laps working on longer runs and further familiarize himself with his YZR-M1, putting together an impressive strong of 1:29’s in the afternoon, demonstrating pace over a longer run as well as in a single lap.

Viñales was understandably delighted with the work completed on Thursday, calling it a big step forward.

“Today we focused a lot on the race pace and honestly we did a great job, we made a big step compared to yesterday. I’m feeling more comfortable on the track and I’m getting more grip from the tyres,” said the 22-year-old.

Despite being almost half a second clear of the rest of the field, Viñales is conscious there is still a lot of work to be done, including what chassis he would like to use.

“I think we did a good job today, but we still have some work to do. We need to choose which chassis we like and decide on a few other things. We still have a lot of laps ahead of us,” he said.

“For sure I was trying to go faster at the end of the session today, but in sector three and four there was a lot of wind so I couldn’t beat the lap time I set this morning, but I’m happy anyway. I’ve been fast with both chassis and all the time I’m riding 1’29-low and 1’29-medium.

“Like I said, we’ve made a big step today and we’ll try to make another step tomorrow.”