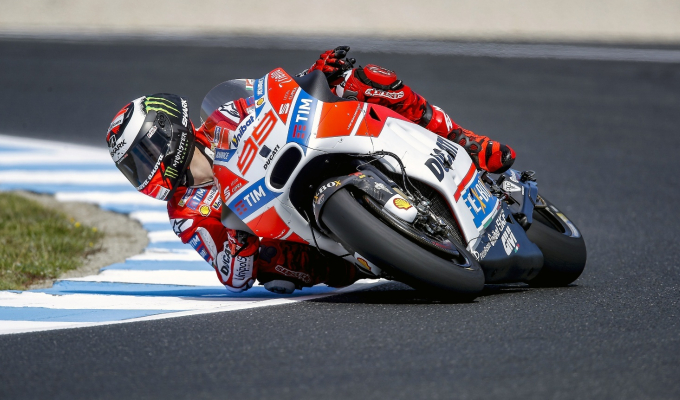 Jorge Lorenzo has said that he is happy with his first day of testing in Phillip Island, despite ending the day eleventh fastest overall, over a second off the fastest time of the day.

The Spaniard continues his long and tough adaptation to the Ducati Desmosedici over the three day test in Australia. Completing 61 laps in the day, Lorenzo completed his fastest lap time of the day with his 33, a 1:30.631, which was 1.134 seconds off of Marquez’s lap time.

Despite the lap times not looking great on paper, Lorenzo said that he is happy with first days work, continuing where he left off in Malaysia.

“The tests here at Phillip Island have begun a lot better than in Sepang,” said the three-time MotoGP World Champion. “Today we used the same base set-up that we had established at the end of the test in Malaysia.”

Despite clear skies and a warm afternoon, a rear tyre that didn’t perform as expected, as well as battling strong winds of the Bass Strait, caused Lorenzo to suffer a huge scare going through the fast left handed Stoner corner.

After the save and with strong winds, the Spaniard decided to sit out the final 90 minutes whilst many of the other riders went on a time trail to improve their final times.

“It was a shame that during the last one and a half hours we were unable to improve our lap times while other riders did. We struggled to lower our times because of the strong wind and in addition the last rear tyre we fitted didn’t have the same sort of performance that we had expected,” he said.

“In any case it’s positive the fact that every day we are accumulating new information and that we are always making small steps forward.”