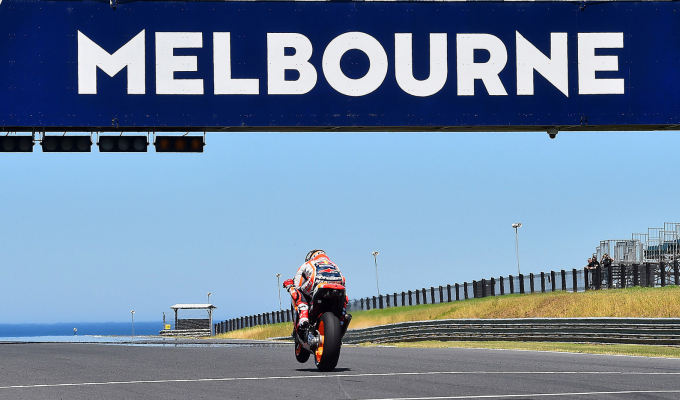 Reigning MotoGP World Champion Marc Marquez laid down his first marker in his title defence, topping the first day of the second official MotoGP test in Phillip Island, ahead of Valentino Rossi and Andrea Iannone.

Marquez had previously bemoaned the electronics of his Honda, but after the first day in Australia he will be much happier with the steps being made going forward.

The closest challenger to Marquez’s time was a late time from Valentino Rossi. Another man who was surprisingly slower in Sepang than expected posted the second best time of the day, just under two tenths behind the Spaniards time, fully equipped with his new internal winged fairing.

Rossi himself was two and a half tenths ahead of third placed Iannone. The Italian seems to be jelling with his Suzuki extremely well and despite electronic issues in the day, ‘The Maniac’ managed to post a late quick lap to propel him up the timing sheet and leave him third. Behind Iannone, Sepang star Maverick Viñales was fourth and just six hundredths behind the Italian, as the next six riders were covered by just half a second.

Cal Crutchlow was top satellite bike and he was just ahead of the fastest Ducati of the day which was Danilo Petrucci. It was this test last year that the Italian crash going through the hayshed, badly affecting the start of his season. Pedrosa was seventh fastest just ahead of the first factory Ducati of Andrea Dovizioso and Jack Miller.

Jonas Folger was the top rookie in tenth position on his Tech3 Yamaha and just ahead of Jorge Lorenzo who will no doubt improve through the test, watch for him to reduce the gap to the front down from the 1.134 it was today.

Aleix Espargaro was 14th, riding the 2016 Aprilia today and is expected to get more new updates to try tomorrow, whilst it will be a long evening for the Aprilia mechanics as his team-mate Sam Lowes suffered two crashes, one totally destroying his Aprilia.

Pol Espargaro was seventeenth as he continues to adjust to the KTM whilst his team mate Bradley Smith ended the day bringing up the tail of the field as he recovers from his crash in Germany last season.

The first day of testing is finished in Phillip Island & it's World Champion Marc Marquez who posts the fastest time, ahead of Rossi #MotoGP pic.twitter.com/6Qb1QMKZhl