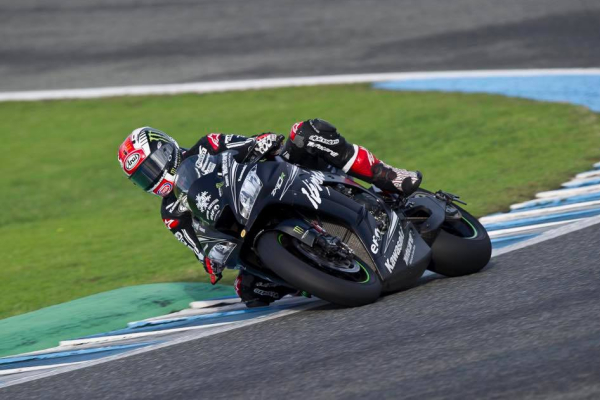 Jonathan Rea was a surprising fastest man during the second day of the combined MotoGP and World Superbike test in Jerez, whilst Alvaro Bautista topped the MotoGP riders on the day.

The two-time World Superbike Champion was one of a number of the World Superbike riders who joined the factory Suzuki, Aprilia and KTM MotoGP riders, as well as some privateer riders from both Ducati and Honda.

HRC gave their riders the week off after completing their testing programme in Valencia, whilst Yamaha blocked Jorge Lorenzo and Pol Espargaro from partaking in the test for Ducati and KTM respectively. Yamaha themselves were busy testing in Malaysia with Valentino Rossi, Maverick Viñales and the Tech3 team.

Jonathan Rea had impressed on the first day of the combined test ending the day second fastest. The Northern Irishman went one step further and posted the fastest lap of the day on Thursday, a 1:38.721 during a race simulation. All the more impressive that it was done in a race simulation and not on a qualifying tyre, Rea’s lap time would’ve been good enough for pole position for the 2016 Jerez MotoGP.

Alvaro Bautista and his Aspar Ducati was the fastest MotoGP rider of the day, posting a 1:38.946 whilst getting through 71 laps on his wingless Desmosedici, which was just ahead of World Superbike’s factory Ducati rider, Chaz Davies.

Former World Superbike star Loris Baz was fourth fastest and just ahead of his former Kawasaki team-mate Tom Sykes. Hector Barbera meant it was four Ducati’s in the top six and he was just ahead of Aleix Espargaro who got through just 41 laps on his Aprilia.

The test officially continues tomorrow, although a lot of the riders and teams are heading home, saving their 2017 testing days for next year when their bikes are closer to those of which they will be running in the 2017 MotoGP season. The winter testing ban begins on December 1st and will run right though until the end of January when the MotoGP paddock reconvene in Malaysia.

Rea ends the day in Jerez with the fastest lap time, it would've been pole in the 2016 MotoGP race! The Ducati of Bautista leads the GP boys pic.twitter.com/axzZpjv4GE