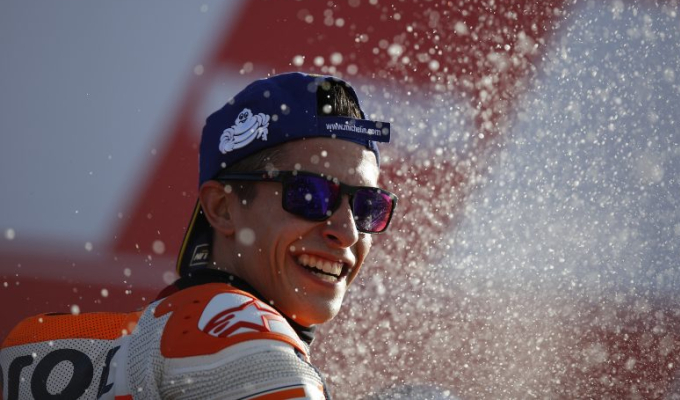 Reigning MotoGP World Champion has rebuffed the notion that he could challenge Giacomo Agostini’s 15 World Championship, despite having five himself at just 23.

Agostini’s record of 15 World Championships has stood for 31 years and with Rossi failing to add to his nine titles since 2009, it appears more and more likely that it will remain unbeaten. If anyone is capable of getting close or even topping Agostini’s record, it could be Marquez. At just 23 years of age, Marc Marquez already has five titles, three of which in the MotoGP class.

Whilst even matching the Italian’s fifteen titles would mean winning the MotoGP World Championship for the next ten seasons, meaning he would have won 13 of the last 14 titles. The speed shown by the Spaniard and the longevity of some current riders such as Rossi at 37 means it’s a possibility, although Marquez himself doubts it’s even possible.

“I don’t like to set goals. Agostini won 15 World Championships and I have five, but I don’t think I’ll get that many,” Marquez told Spanish magazine Woman, at the launch of his own fragrance ‘Hero’.

Marquez points to the fact that ‘Ago’ was able to compete in more than one category, with him winning two titles in five years.

“Beforehand they could compete in two categories in a year, I can’t now,” he said. “What I really hope is to continue having fun. My dream as a child was to win in all three categories and I did it when I was 20. Now, whatever God wants, will come.”

Marquez spoke of many things in the interview, including the death of his friend Luis Salom. Salom tragically lost his life during a freak free practice accident in at the Circuit de Catalunya in June. Marquez said that whilst the incident hurt him badly, he couldn’t let it affect him too much, otherwise he would’ve had to walk away from racing.

“It impacts you a lot, because he was a partner, he was Spanish, and I knew his family. But you can’t let it affect you too much, because I would have to park the bike and go do something else,” he said.

“Death isn’t something I think about, when it has to arrive, it’ll arrive. I run the same risk as a kid taking the car every weekend.”