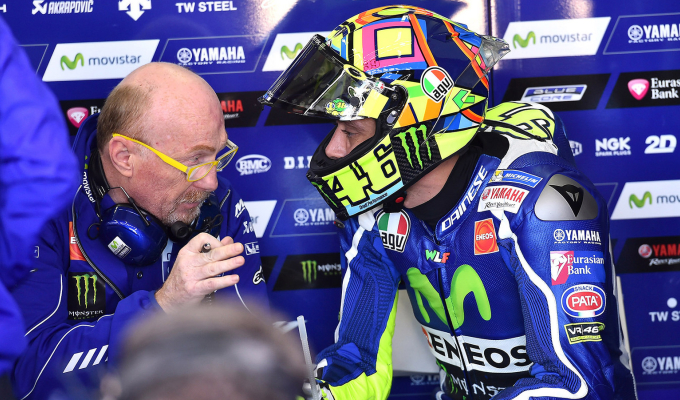 Valentino Rossi’s crew chief Silvano Galbusera has said that ‘the Doctor’ was “preoccupied” in 2016, but says the Italian is now focused on winning a historic tenth World Championship.

Rossi hired the services of the Italian back at the end of 2013, ending his long and successful relationship with Australian Jeremy Burgess. Galbusera helped light a new fire under Rossi, helping him to three consecutive second place finishes in the MotoGP World Championship.

The events that unfolded late in the 2015 season impacted Rossi deeply, and Galbusera believes that Rossi’s mind was elsewhere at times during 2016. With thoughts of the previous season and his clash with Marquez still in the forefront of his mind.

“I see him charged and motivated, ready to go. In 2016 he was preoccupied, the tests reassured him but he was not as relaxed as normal,” Galbusera told Italian daily Gazzetta dello Sport.

“He knew he had to be careful, that every little incident with Marquez would be blown up. He couldn’t allow anything.

“But now he returns with one objective, to beat everyone. It’s a tall order and it’ll be hard this season. We will try and win this 10th World Championship. I will give everything I can.”

The 60-year-old said that the Honda is currently the bar setter in MotoGP, thanks in no small part to their understanding of the standardised electronics. Galbusera backed Yamaha to find solutions to their issues and will use this months test as a measuring stick to where they currently are.

“We started well [in 2016] but suffered after Mugello. Honda made some progress with electronics and Yamaha didn’t, but Yamaha usually gets whats needed done,” said Galbusera.

“At Sepang we’ll begin to see how competitive we are. We’ll see if we are at the level of the others or if we will have to chase Honda and Ducati.”

As well as having to hunt down the Honda’s, a big challenge to Rossi’s title challenge will once again come from the other side of the Yamaha garage. New factory Yamaha rider Maverick Viñales starred during the post-race test in Valencia, topping the timing sheets. The Italian admitted he would be shocked if Viñales wasn’t fighting for the title.

“Maverick is fast! The Suzuki is a similar bike and he hasn’t had any major problems adapting, but I did not expect him to go so fast,” he said.

“In any case I would be surprised if he and Valentino weren’t fighting not with Marquez for the title.”

One rider Galbusera isn’t totally convinced can challenge Rossi is former teammate Jorge Lorenzo. Lorenzo joins Ducati after nine seasons with Yamaha and despite having what Galbusera beleives is race winning speed, he doubts if Lorenzo can win the title.

“I don’t know what will be the level of Ducati with him. There will be races where he will do very well and he can win. But I doubt he can fight for the title.”