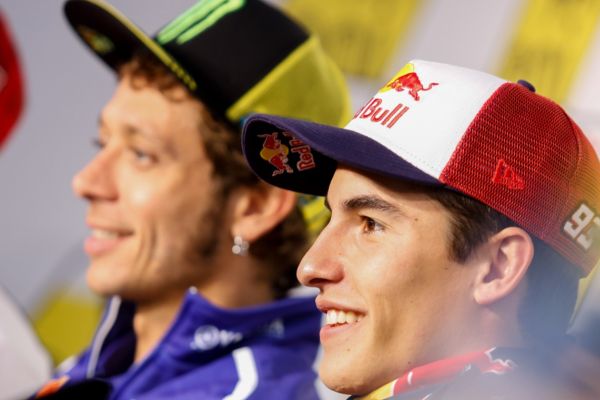 Valentino Rossi’s feud with Marc Marquez has taken another step forward with the Italian terminating his contract to run his merchandise under the VR46 banner.

The latest reports, which are coming from Corriere della Sera say that The Doctor’s relationship with Marquez after the events of Malaysia and Valencia have gotten too much, and he will now remove the two-time MotoGP World Champion from his list of riders that he provides merchandise for.

The VR46 company has a turnover of over 12.5m Euros, with Marc Marquez the second most profitable rider of the twenty in which Rossi’s company produces and sells merchandise for. The company sells everything from t-shirts and caps to phone cases and key rings, with large tents off official merchandise at every MotoGP round.

The reports say that the decision to terminate Marquez’ contract was made after the weekends season finale in Valencia. On Monday evening both Marquez and Rossi were individually asked about the future of the agreement. Marquez said; “We are doing very well, we will not change anything,” with a smile.

The response was a lot less convincing from the Italian, who just said: “We’ll see if we continue working together.” The nine-times World Champion is said to feel betrayed by Marquez’ actions and his perceived willingness to aid compatriot Jorge Lorenzo to win this seasons MotoGP World Championship.

It is not clear whether Rossi will continue to work alongside Marc’s younger brother Alex, who his company also manages. Neither party has confirmed the break yet.