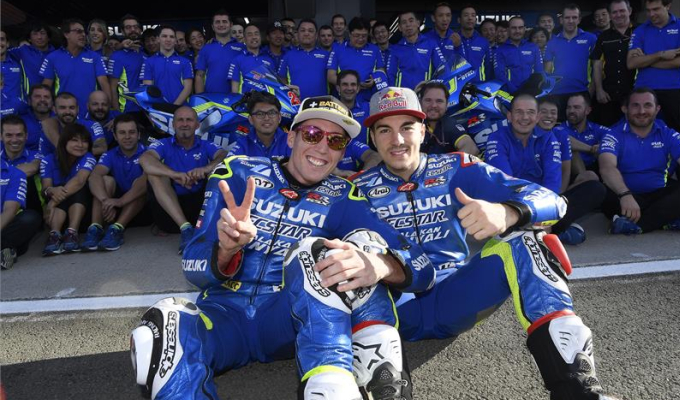 Maverick Viñales believes his former employers have made a mistake by swapping the experienced Aleix Espargaro for rookie Alex Rins next season.

Viñales left Suzuki after two years with the Japanese factory, in favour of a switch to Yamaha to partner Valentino Rossi. The Spaniard had spent two seasons at Suzuki, being partnered by compatriot Aleix Espargaro for both of those seasons.

Espargaro had been in MotoGP for four seasons, previously riding for the Pramac Ducati, ART Aspar and Forward Yamaha teams before getting his factory opportunity with Suzuki at the beginning of 2015. However, after two seasons and two eleventh place finishes in the World Championship, Suzuki decided to move on from Espargaro.

Suzuki instead electing to run rookie Alex Rins next season, leaving Espargaro to join Sam Lowes in the factory Aprilia team. Rins comes into MotoGP after two seasons in Moto2, where he failed to win the World Championship in either season, finishing second and third in his two years. Rins will partner Italian Andrea Iannone who Ducati elected to release to make way for Jorge Lorenzo.

Viñales said Suzuki have made a mistake by not holding onto Espargaro, who according to Viñales, is an important reason as to why the bike is now so strong.

“I really did not expect them to change Aleix, he did a great job last year,” the 21-year-old told German website SPEEDWEEK.com.

“He’s an important reason why the bike is so good now. In my opinion it’s a mistake that they swapped Aleix, but of course Suzuki wants to win, everyone wants that. They hope that with the combination of Iannone and Rins.”

“I do not know how Suzuki will go next year. It won’t be easy, because Iannone has a different riding style to mine. We have developed a bike over the last two years, which is suitable for my riding style. This won’t be easy for him. Perhaps it was due to the Ducati, but he brakes very hard in the corners, where the Suzuki needs to carry more corner speed. But again, maybe it was the qualities of the Ducati that forced him to develop this style,” said Viñales.

He continued, “Rins is really fast, but he will needs a lot of time to understand the bike. When I entered MotoGP, the bike wasn’t on the same level as it is now. It was certainly a second slower. This will be an advantage for him, but he still has to learn to deal with the extra power of a MotoGP bike.”

Iannone impressed during the the first test of 2017 at Valencia where he ended the post-race test, ending fifth fastest overall 0.6 off of the pace of Viñales on the Yamaha. Whilst Alex Rins’ test was cut short due to a crash, resulting in the Spaniard being transported to a local hospital.