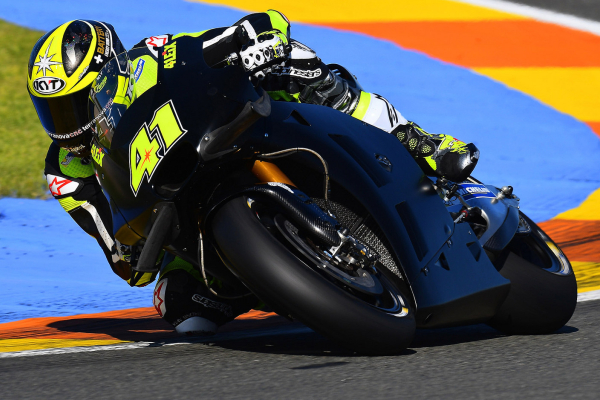 Gresini Aprilia rider Aleix Espargaro has said that the Aprilia RS-GP is a better bike than he expected, as he begins his preperations for 2017.

The Spaniard will join the Noale factory after two years in the Suzuki factory team and ended the two-day 2017 test ninth fastest overall, less than a second behind the fastest time of the test, set by Yamaha’s Maverick Viñales.

Espargaro’s time of a 1:30.885 was also just 0.1 seconds behind the fastest time he managed throughout the combined four practice sessions during last weekends season ending Valencia Grand Prix where he was on the Suzuki.

The bike which Espargaro has been testing is the 2016 bike which Alvaro Bautista and Stefan Bradl rode throughout the 2016 season. With no new parts expected before the first test after the winter break in Sepang at the end of January, it was a time of adjustment for the Catalan.

“I’m satisfied with the feeling I had with the bike and with the team,” said the 27-year-old.

“It’s great to have a feeling like that immediately in a team and I’ve felt great these last two days. They’re looking for the same as me and really enthusiastic with the new project.”

Espargaro highlighted the front end of the RS-GP as a particularly strong point of the bike, as he looks to help Aprilia follow the same development path Suzuki did, when he joined them two years ago.

“The RS-GP is a little bit more competitive than what I expected, the front is really really good and I’m looking forward to improving, developing the bike and see if we can go in the right direction,” he said.

Espargaro will now head down to Jerez along with his rookie team-mate Sam Lowes as they prepare for a second private test alongside the Ducati and Suzuki riders before the winter testing ban comes into effect from December 1st.