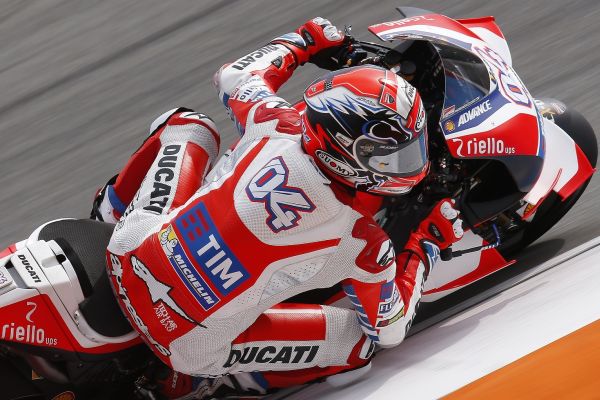 Andrea Dovizoso twisted his right knee in a testing crash today during a private one-day test at the Misano World Circuit in Rimini.

Dovi was joined by his Factory Ducati team mate Andrea Iannone for a one day test at the Misano circuit, where they worked on new parts for their Desmosedici GP machines. With perfect weather and track temperatures teaching 45 degrees, Dovizioso managed to complete 93 laps with a best time of a 1:33.195. However, his test was cut short when he crashed a turn four, unfortunately twisting his right knee in the process.

Austrian MotoGP winner Andrea Iannone managed to complete 59 laps, and lapped a fraction quicker than Dovizioso, with his best lap a 1:33.115, which is just over a second slower than Jorge Lorenzo’s 2015 pole position time.

Along with both factory Ducati riders, the factory Aprilia team was on hand to test with both factory riders Alvaro Bautista and Stefan Bradl, whilst 2017 rider Sam Lowes was also there for part of their two day test. Mika Kallio and Karel Abraham were also there testing the KTM RC16, and they will continue to test right for a further two days.