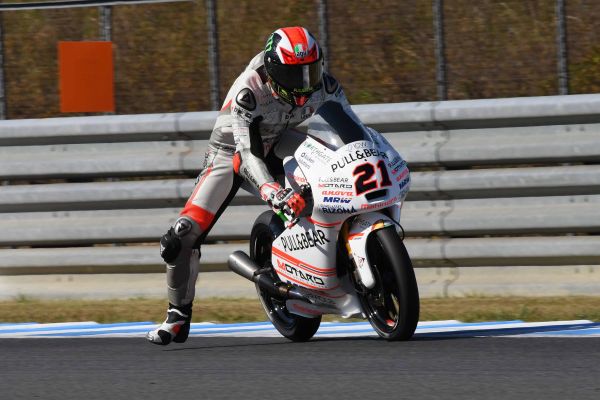 Pecco Bagnaia won his and Mahindra’s second race of 2016 after a crazy-shortened Moto3 in the searing Malaysian heat.

Starting from third position, Bagnaia had an awful start and was lucky not to jump start or get caught up in the crash fest that was the opening couple of laps around the Sepang International Circuit. On turn two, we lost Andrea Migno, Juanfran Gueverra and stand in rider Ayumu Sasaki. Five corners later, a nasty crash sparked by Jorge Martin saw Nico Bulega, Phillip Oettl and Aron Canet also get caught up.

Just two laps later, three of the leading four riders crashed out all in order at turn seven when it appeared there was something was down on the track. Leader Joan Mir, Brad Binder and fourth placed Lorenzo Dalla-Porto all crashed out with sixth placed Fabio Di Giannantonio all sliding out.

On the fifteenth lap of 18, the red flags were bought after Maria Herrera had tagged the rear wheel of Livio Loi, causing the Spaniard to crash and momentarily be left in the middle of the track. The red flag was conterversial with cameras panning back on Herrera already walking off the circuit under her own power.

With the red flags out and over two third race distance done, a result was declared with Bagania taking the honours by six seconds ahead of Jakub Kornfiel and Bo Bendsneyder.

The Italian who will be moving into Moto2 with the VR46 team next season called todays race the hardest of his life.

“This is the hardest race of my life,” said Bagania immedietly after the race. “I was pushing to my best. My second win and the third for Mahindra, truly amazing.”

The timing of the red flag was drawing confusion and controversy with it coming out after two third race distance was completed and not after the three leaders went off at turn seven when it appeared there was fluids on the circuit.