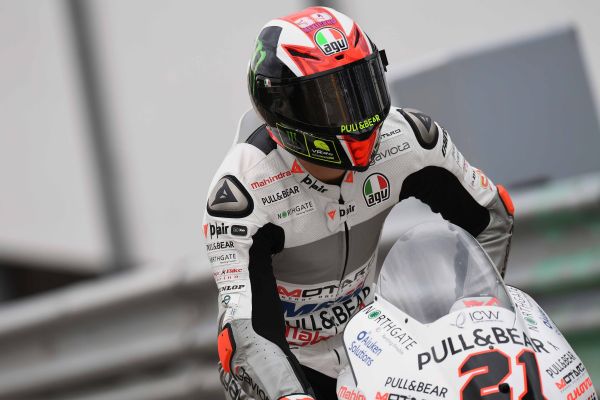 Italian Pecco Bagnaia guided his Aspar Mahindra through the Silverstone rain to claim his first ever pole position ahead of tomorrows British Moto3 Grand Prix.

Bagnaia, who only completed six laps in morning warm up due to a technical fault with his Mahindra, decided that the best plan of attack would be to complete as many laps as possible in the wet conditions to find grip, before pitting for a fresh tyre and a final assault on the pole position.

Bagnaia’s best time of 2:33.642 was 0.106 faster than second placed Enea Bastianini. The two Italians will be joined on the front row by Dutchman Bo Bendsnyder.

Morning pace setter Jorge Navarro led the session before falling and not being able to recover his Honda under his own power. He did get back out at the end of the session but will start tomorrows race from 18th position, one position behind Czech Moto3 winner John McPhee.