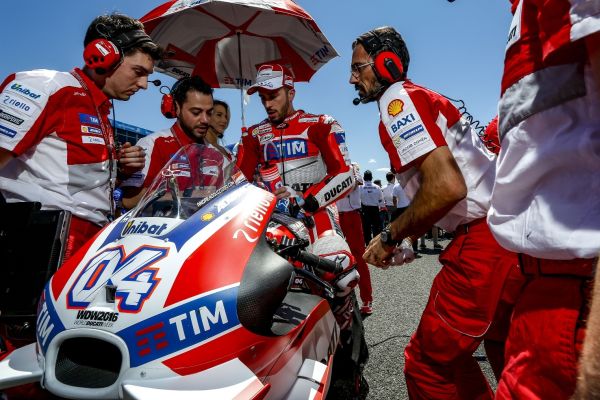 Andrea Dovizioso’s awful luck continued in Jerez after he revealed that a broken water pump was the reason he was forced retire from Sunday’s Spanish Grand Prix.

The Italian was running in seventh position and as the lead Ducati on lap nine, but behind the factory Yamaha, Honda and Suzuki’s when he felt a strange feeling from the rear of his Desmosedici GP16. Dovizioso sat up and Eugene Laverty even waved to Dovizioso to suggest there was a problem with the rear end of his bike.

Dovizioso said that the broken water pump was causing water to go onto the rear tyre, almost causing him to crash “two or three times”.

“Unfortunately we had a problem with the water pump. So the water went onto the rear tyre and I almost crashed two or three times, that’s why I had to retire,” explained the Italian.

“It’s very bad because the last three races we’ve taken no points and for the championship this is really bad. But things like this can happen.”

“We have to look at the positive things,” he said.

“I didn’t crash and my feeling with the bike is good. So I will go to Le Mans with the same confidence I arrived here with.”

Dovizioso still only has the 20 World Championship points he claimed at the season opener in Qatar, and whilst the three retirements have all been out of his control, the Italian will be desperate to find some form and luck with his job on the line for the next race in Le Mans in two weeks time.