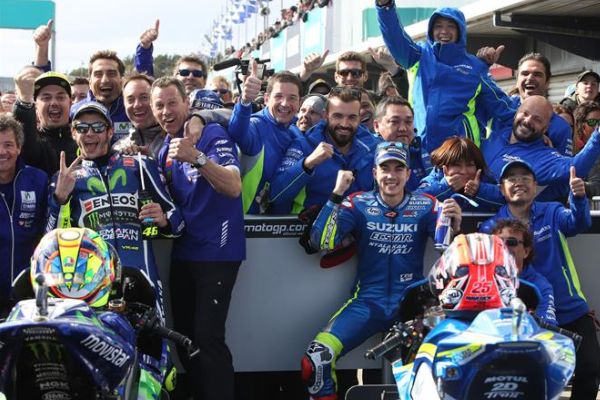 Maverick Viñales’ Suzuki crew-chief believe the Spaniard and Valentino Rossi’s relationship will only go downhill when Viñales moves to Yamaha.

The 21-year-old will replace the Ducati bound Jorge Lorenzo in the factory Yamaha team, after just two seasons with the factory Suzuki team. After a solid if not slightly unspectacular rookie campaign, Viñales has gone from strength to strength in 2016, claiming four podiums, including his debut win at Silverstone.

Back-to-back podiums in Motegi and Phillip Island prompted conversation that Viñales could be the latest in a long list of riders to join the illusive “alien” group of riders. Whilst calling Viñales on the same level as Marc Marquez, Rossi, Lorenzo and Dani Pedrosa may seem premature, his potential is evident for all to see.

During his success on the Suzuki, Viñales has enjoyed friendly exchanges with his 2017 team-mate, however, Viñales current crew chief, Jose Manuel Cazeaux beleives the friendly nature between the two will end when they share a garage.

“It’s hard to be companions when everything stays the same,” Cazeaux told Spanish daily AS, answering a question if the two can remain friends when they’re sharing the same equipment and fighting for the same goal.

“But I hope that there is respect. But no, I don’t see a friendship in the same box.”

The Argentine crew-chief won’t be following Viñales to Yamaha, with the 21-year-old set to join forces with Lorenzo’s current crew-chief Ramon Forcada. Cazeaux, who will be helping Alex Rins in his transition to MotoGP, was full of praise for Viñales and the work he has done for the Suzuki GSX-RR, as well as showing his own talents.

“I think ‘Mack’ is a rider who is still evolving,” he said. “He’s working on a lot of different things to keep improving. He’s a rider that Suzuki have to be grateful to. We believed that we were going to grow with him, but he’s not only improved the bike, but pushed to the limit and allowed us to develop the bike.

“You say good things that happen and it is difficult to tell what his ceiling is. He’s in his second year in MotoGP and the first with a competitive bike. We’ve seen the second half of the year, he is very, very good and I think in the future he will fight for MotoGP World Championships.”

Whilst Viñales won’t be expected to win the World Championship in his first season at Yamaha, Cazeaux did say why can’t he win it with Yamaha.

“We will be happy if he becomes World Champion,” he said.