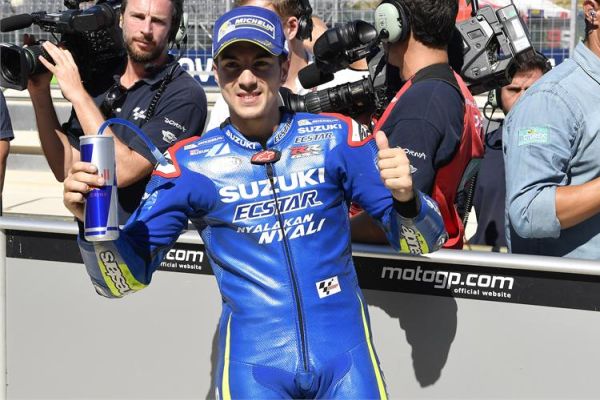 Suzuki Team Manager Davide Brivio has said that good friend Valentino Rossi will have to be aware of Maverick Viñales when the Spaniard join Rossi in the Movistar Yama team next season.

The 21-year-old Spaniard will join Rossi in the Movistar Yamaha team next season, after it was announced that current rider Jorge Lorenzo was to join Ducati for 2017. In 2016 Viñales really demonstrated the talent that was evident during his Moto3 World Championship and his Moto2 rookie of the season awards in 2013 and ’14 respectively.

Viñales has claimed  two podiums in MotoGP this season, including his maiden win at Silverstone; Suzuki’s first since 2007 and first in the dry since 2000.

Before heading Suzuki’s MotoGP project, Brivio worked alongside ‘the Doctor’ at Yamaha between 2004 and 2009 before going on to help the Italian with his VR46 merchandising company. Brivio has said that Viñales’ target at Yamaha will be to beat Rossi, and the nine-times World Champion will need to be aware of the talent and the speed of his young team mate.

“They are two great talents. Valentino has won a lot and Maverick wants to. Viñales is an intelligent rider who understands what it takes to be competitive. At Yamaha, it will be his goal to defeat Valentino,” Brivio told Motorsport.com.

“When he gets on the same bike, is certainly great influence on him, but also to have everything around it. In addition, he has such a great reference point. At Suzuki, he was quickly the faster rider, so he had no reference. When he is having a bad time at Yamaha, then Valentino will be better than he. This will keep him awake and give him a target. From this perspective, he might still have a lot of room for improvement, but it will make him stronger.

Valentino has a lot of experience and is still strong, but he should be aware of Maverick, which will end up motivating him. He already has a very fast team mate [Jorge Lorenzo], so things will not change much for him,” he said.