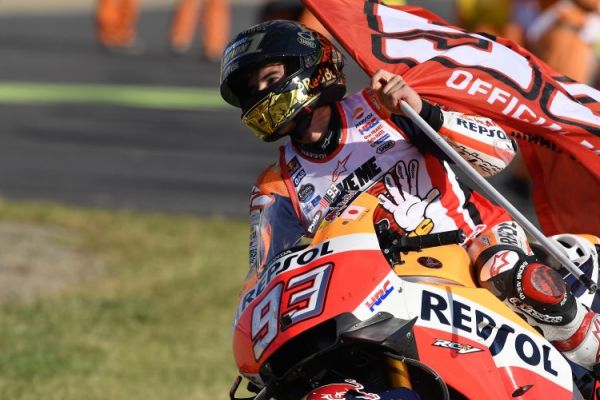 Marc Marquez won the 2016 MotoGP World Championship after victory in Motegi, with the two Yamaha riders crashing out in separate incidents.

The victory in the end proved to be an easy one for Marquez, as he coasted to victory after leading almost from start to finish with crashes from both Yamaha riders. Marquez had looked in total control all weekend despite saying it was one of his weaker circuits before the weekend. However, after taking the lead and applying the pressure, the only man who could realistically stop Marquez from becoming World Champion, Valentino Rossi, crashed out of the race on the sixth lap.

With Jorge Lorenzo sitting in a net podium position, it looked as if Marquez would have to wait until next weekend to claim his fifth World Championship, however with five laps remaining, Lorenzo crashed under pressure from Ducati’s Andrea Dovizioso, leaving Marquez to cruise to victory.

With Lorenzo out, Dovizioso had a comfortable second position, whilst Maverick Viñales narrowly beat out his team-mate Aleix Espargaro to the final podium spot.

Espargaro then finished ahead of Cal Crutchlow who beat out Pol Espargaro and the extremely impressive Aprilia of Alvaro Bautista, whilst the Pramac Ducati’s of Danilo Petrucci, Scott Redding and Stefan Bradl round out the top ten.