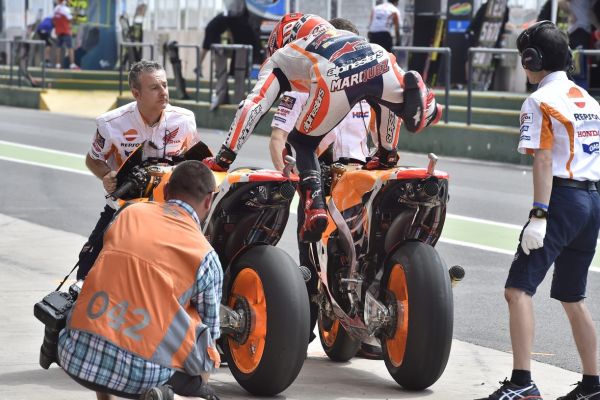 Marc Marquez completed a perfect weekend as he claimed his first win of 2016 during a crash ridden Argentine Grand Prix that saw reigning World Champion Jorge Lorenzo crash out.

After dry warm up, the race was split into two, with a mandatory pit stop to be had at in between a three lap window in the middle of the race.

Marquez had been quickest in every session over the weekend and completed his weekend after a dominating victory, which saw him cross the line 7.6 seconds ahead of Valentino Rossi.

It wasn’t all plain sailing however for the Spaniard. Both Marquez and Rossi pitted at the end of the tenth lap, with the pair split by no more than two tenths of a second. Marquez’ now specialist bike switch saw him gain the better part of two seconds on the Italian. Marquez then managed to get his second bike back up to speed faster than Rossi, who found himself stuck behind Tito Rabat for a lap, ruining ay chances of a victory.

Rossi’s chances of finishing on the podium looked in doubt when first Maverick Viñales challenged him, only to crash out of third place at turn one with three laps to go. Then on the final lap the Factory Ducati’s of Andrea Dovizioso and Andrea Iannone both passed the Italian on the final lap, only for a moronic move from Iannone saw both Ducati’s end up in the dirt in the final corner.

Dani Pedrosa was the beneficiary from the late crashes to claim his first podium of the season.

Behind the front three, Irishman Eugene Laverty passed both Pol Espargaro and Hector Barbera on the final lap to claim a career best fourth place finish, just ahead of Barbera whilst Espargaro could only manage sixth place.

Stefan Bradl gave Aprilia their best finish since returning to MotoGP with seventh place ahead of Bradley Smith, Tito Rabat and Alvaro Bautista who rounded out the top ten.

Aleix Espargaro suffered an early crash but remounted and finished eleventh ahead of Michele Pirro whilst Andrea Dovizioso pushed his Ducati across the line as the last finisher in 13th place.

Jorge Lorenzo crashed out of the race on the sixth lap losing the front end late in turn one whilst an electronic problem for Scott Redding robbed him of a net podium, with his bike giving way shortly after the Brit made a move on Pedrosa.