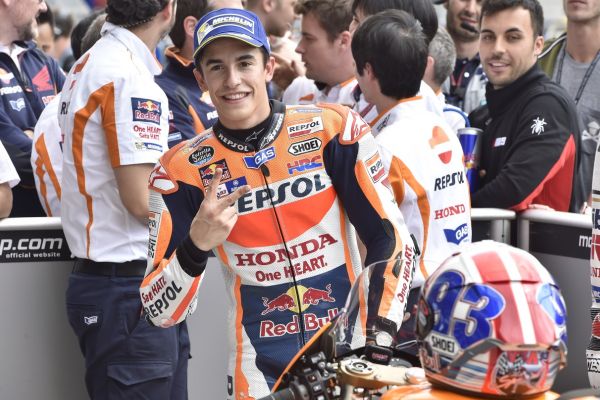 Marc Marquez won his fourth straight race at the Circuit of the Americas in Austin Texas in dominant fashion by just over six seconds, ahead of Jorge Lorenzo and Andrea Iannone, whilst Valentino Rossi recorded his first DNF of 2016 crashing out of the race.

Marquez went into the America’s Grand Prix after winning all eight of the MotoGP races in America since making his debut in the premier class in 2013 and he extended the streak to nine today with sheer domination.

Starting from pole position, Marquez came under early pressure from both Lorenzo and Dovizioso, however the duo nearly seriously managed to challenge Marquez who rode away from the field only backing off on the final lap to stop the victory being way more than the six seconds it ended being.

Lorenzo has a lonely race in seconds position ending just as far behind Marquez as he did ahead of Iannone, who himself was fortunate to inherit the final podium position after a nasty looking incident between Dani Pedrosa and Andrea Dovizioso.

Pedrosa’s bike appeared to have a problem before he lost the front end into turn one smashing into the left leg of third placed Dovizioso. It is the second time in just seven days that Dovizioso had been taken out of the race through no fault of his own after Iannone had knocked him off in Argentina last week.

Pedrosa showed his class ensuring Dovizioso was okay before remounting and rejoining the race before the damage sustained eventually forced him to retire. After he pulled into the pit he walked down to the Ducati garage to apologise further and ensure the Italian was OK.

Maverick Viñales recorded a career best fourth position after getting the better of his team-mate who brought his Suzuki home in fifth position just ahead of top private bike Scott Redding.

Valentino Rossi’s title challenge took a serious turn for the worst when he lost the front end of his Yamaha M1 going into turn two and was forced to retire from the race.

He's fine but out of the Americas GP is Valentino Rossi #VR46 https://t.co/NoGOArzBBx

There were also crashes for Loris Baz, Cal Crutchlow and Bradley Smith who all rejoined, with only Baz collecting any World Championship points.

Marquez now leads the World Championship standings by 21 points over Jorge Lorenzo. Valentino Rossi sits a further 12 points back as MotoGP heads back to Europe and to Jerez for the fourth round of the series in two weeks time.