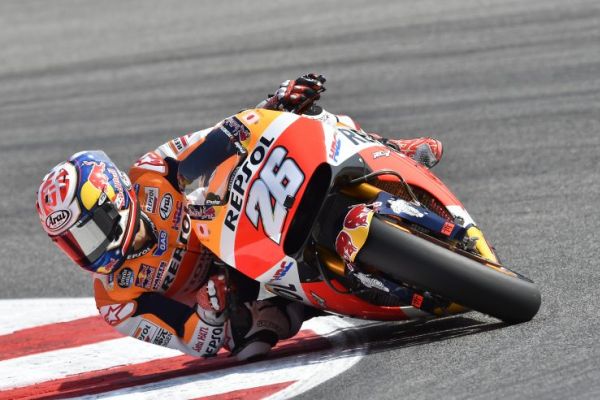 Despite starting in the middle of the third row, the pace shown in free practice gave Pedrosa renewed confidence that he could challenge at the front of the race, however, what he managed to achieve surely even surprised Pedrosa. With both the Yamaha’s and Marquez getting away in the early stages, Pedrosa kept calm and with his soft compound front tyre, closed the gap to the leaders and set about moving past the front three in the World Championship.

Pedrosa quickly caught Marquez and passed the World Championship leader in turn 13 and then disposed of the reigning World Champion four laps later. Pedrosa then closed the second gap to Rossi in three laps and passed Rossi into turn four at Rio with a surprise block pass. Once ahead, Pedrosa wouldn’t be overtaken.

Pedrosa’s victory does mean that he extends the sequence of eight different winners in eight races after Lorenzo, Rossi, Miller, Marquez, Iannone, Crutchlow and Viñales, Pedrosa continued this remarkable season.

Valentino Rossi took a further seven points off of Marc Marquez at the top of the World Championship standings down to 43 points, however, with five races left Rossi will need some good fortune to win a record tenth World Championship.

Jorge Lorenzo consolidated his rough period of his own with a solid third position, although the World Champion was disappointed not to have the pace of the front runners. Marc Marquez also struggled with race pace, after another tyre gamble appeared to backfire for the Spaniard.

Maverick Viñales beat the two factory Ducati’s of Andrea Dovizioso and Michele Pirro into fifth position, whilst Cal Cruchlow’s remarkable run of 3 podiums in four races ended today with an eighth place finish, although he did end top independent bike, just ahead of Pol Espargaro.

Alvaro Bautista rounded out the top ten and capped an impressive weekend for Aprilia whilst team-mate Stefan Bradl with twelfth, with Danilo Petrucci split the two Aprilia’s.