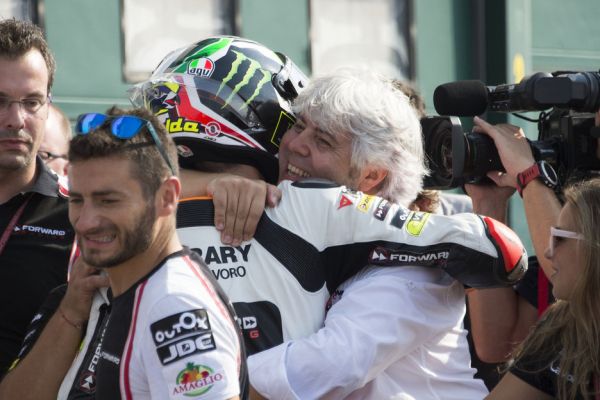 Lorenzo Baldassarri won his first ever Grand Prix after a cagey and emotional Moto2 race, which saw Alex Rins close the gap to Johann Zarco at the top of the World Championship to three points.

Baldassarri who just missed out on victory earlier in the season in the first Italian Grand Prix at Mugello went one better in the second Italian race in Misano where he narrowly beat out Alex Rins.

On the fifteenth anniversary, the Forward Racing team were sporting a special Stars and Stripes livery in honour of the victims of the New York terror attacks and Baldassarri did all he could to honour the victims as he could with a superb performance to win in front of his home crowd.

Alex Rins established an early lead of up to two second at one point, however, Baldassarri broke away from the chasing back and set about hunting down the Spaniard. Baldassarri eventually made his move on Rins halfway around the penultimate lap. Despite a late charge from Rins, Baldassarri held on to claim his first Grand Prix victory of his career, at the 64th time of asking.

Rins was content with his second place finish, when combined with Zarco’s fourth place, Rins reduced the gap at the top of the World Championship to the Frenchman down to single figures with five races remaining.

Taka Nakagami ended his strong weekend with a third place finish at the scene of the passing of his close friend Shoya Tomizawa six years ago.

Zarco did a damage limitation job on his World Championship chances, ending fourth and beating out Franco Morbidelli and Tom Lüthi who finished fifth and six respectively. With his sixth place, Lüthi moved ahead of Sam Lowes into third position in the World Championship, after Lowes crashed out of fourth position in the middle of the race. The Brit touched a bump at turn 15 and ended a tough two week run for Lowes.

Hafiz Syahrin was seventh ahead of the two Germans Jonas Folger and Sandro Cortese, whilst Alex Marquez had a calmed and understated tenth place finish.