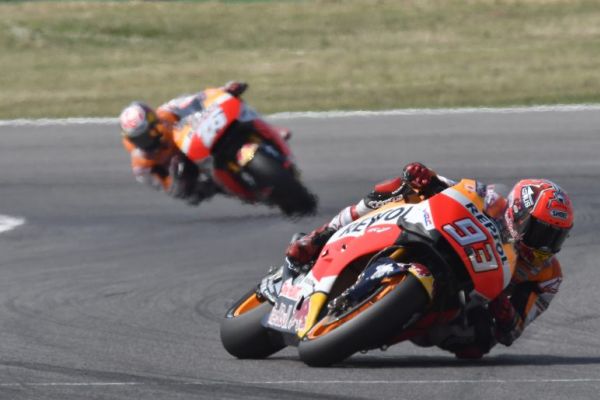 The Spaniard started todays race 50 points ahead of second placed Valentino Rossi and knew that he only had to keep Rossi in sight to keep in order to keep his championship in check. Despite a strong start and middle to the race, Marquez dropped off alarmingly, ending the race in fourth place to Rossi’s second place.

Whilst losing only seven points to Rossi, Marquez was disappointed with the way the race panned out, after feeling good ahead of the race.

“Today’s race was complicated and it was perhaps not one of my better days. I went out with great desire and I felt strong, able to recover the ground I had lost in the first few laps and close in on Valentino and Jorge,” said the 23-year-old.

Marquez had gone against the Yamaha’s and his team mate with regards to what front tyre to run. The two Movistar Yamahas elected to run the medium front, whilst race-winner Dani Pedrosa fitted a soft tyre to the front of his Honda RC213V.

Marquez said that he had an issue with his front tyre, which ultimately prevented him from challenging Lorenzo for the final spot on the podium.

“Then I saw I had problems with the front tyre, because I was losing it a lot. When Dani passed me, I tried to follow him, but I saw that it was more likely that I would crash than finish on the podium, so I concentrated on finishing the race. We have to keep improving, but the positive thing is that we only lost a few points during a weekend that had been good but that we weren’t able to capitalise on in the race. Now we’re very motivated for Aragon.”