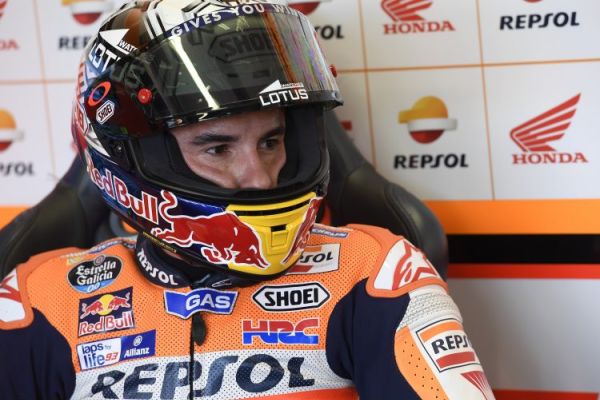 MotoGP World Championship leader said that he didn’t suffer as much as he expected during a first day in Misano which saw him end the day fifth fastest overall.

The Spaniard is currently leading the MotoGP World Championship by 50 points over Valentino Rossi, and despite implementing a much more measured approach to his title challenge, Marquez and Honda are expected to struggle in Misano this weekend. The areas of short, sharp acceleration are said to not play into the strengths of the aggressive Honda RC213V.

In spite of this, Marquez still managed to end the first day in an competitive fifth position just 0.427 off of the fastest time set by Pol Espargaro.

Marquez said he was happy with the first day of action on the Adriatic coast, working with all of the tyres made available to him by Michelin to ensure he has data on all tyres to make a decision for Sunday’s race, a luxury didn’t have last weekend in Silverstone.

Marquez’ satisfaction of his opening day  was despite a small, slow corner crash in the morning session that saw him lose the front and fail to keep the bike up on his elbow, as he has done so many times before.

“I’m happy with how the day went overall. I think we worked pretty well and we’ve tried out almost every tyre as we didn’t want to make the same mistake we made in Silverstone,” explained the 22-year-old, after the day’s practice.

“In the morning I had a strange feeling with some different front tyres; I pushed the front in a slow corner and lost it, although I was already looking for the limit at that point.

“Honestly we’ve suffered less than we had initially expected; in fact, I was able to be among the fastest riders and I think that if we continue to work well we can have a good weekend.”