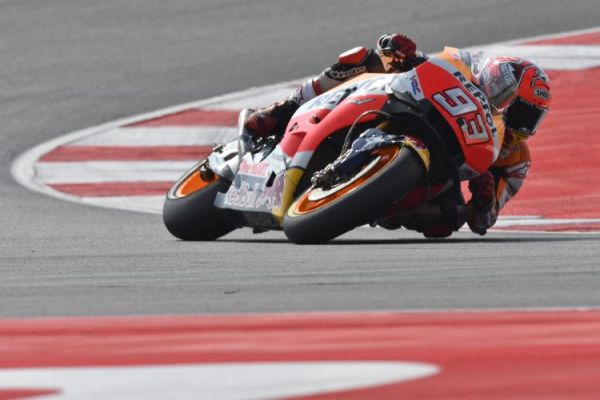 Despite missing out on the front row for the second weekend in a row, MotoGP World Championship leader Marc Marquez said that he is happy with the race pace of his Honda RC213V ahead of tomorrows San Marino Grand Prix at Misano.

Marquez led the combined first three free-practice sessions and was a hot red favourite to take pole position on the Adriatic coast. However, after a less than optimal qualifying session, the World Championship leader finds himself starting tomorrows race from the head of the fourth row.

Sat in a net second place after the first set of flying runs, Marquez was hoping to challenge the lap record pace of pole sitter Jorge Lorenzo. However, on his second run, a combination of traffic – including a comical moment where he came out of the pit lane at the same time as Jorge Lorenzo, with the duo telling the other to go first – and a rear tyre that wouldn’t work in the way he wanted, he was unable to threaten the front row.

Despite starting on the second row, Marquez said he was happy with the pace of his Repsol Honda on used tyres during the longer runs from FP3 and FP4.

“I’m happy because I felt strong throughout the day, especially in FP3 and FP4. Actually, I was most comfortable in FP4, which is when you set your race pace,” said the 23-year-old.

“In the qualifying session I felt quite good with the first tyre, but we couldn’t make the most of the second one because there was a lot of traffic and I wasn’t able to put in a perfect lap. The important thing is that we’re on the second row, close to Jorge and Valentino, and have a good pace going into the race, so we’ll try to fight for the podium.”