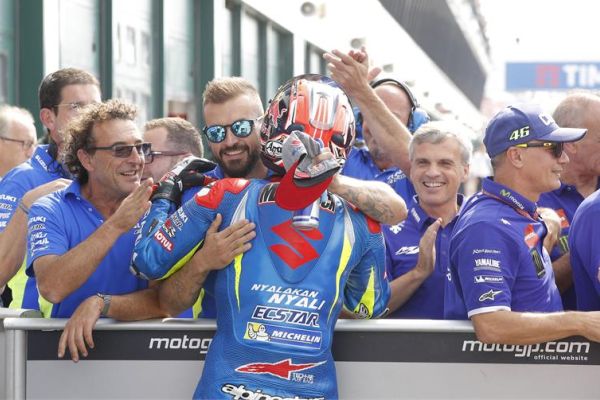 Maverick Viñales was delighted to secure a third place start for the second time in a week, as he hopes to build on from his victory last weekend.

Viñales ended the first day and two free practice sessions tenth fastest overall, with his Suzuki GSX-RR struggling with high heat of the afternoon. However, work done after FP3 and ahead of Q2 saw the 21-year-old a lot more confident and qualify in third position, behind the two Movistar Yamahas of Jorge Lorenzo and Valentino Rossi.

The Spaniard said that it was important for him to be on the front row, as it will allow him to be fighting with the leaders right from the off, rather than having to work through the field and already being too far behind the leaders to fight for the victory.

“Today wasn’t easy at all because usually with hot temperatures we struggle, but the team made extraordinary work between FP3 and qualifying and also I made a step, and so I could make a very effective lap,” said the factory Suzuki rider.

“It is very important because the front row will allow me to be immediately at the front and fight for a good race. We have been pretty consistent in our improvements and finally we got within the fastest, we developed many solutions for the set-up and my crew found a very good setting.”

Viñales also said that he and his Ecstar Suzuki team now have more ideas and options for tomorrows race with regards to setting. Last weekend Viñales judged his tyre choice to perfection, and whilst not finding the perfect set-up thus far, the work done today means there are now more cards on the table for Viñales.

“Now we also have some more ideas to work on tomorrow to see if we can find that little more that I believe we are still missing in our potential, as this will allow me to improve the pace which is the most important thing for the race,” he said.