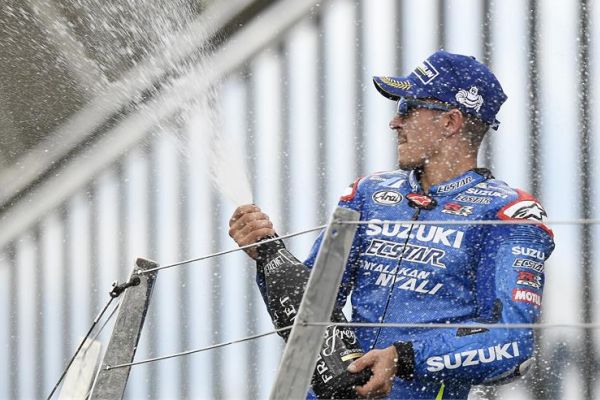 British MotoGP race winner Maverick Viñales said that he is happy to be immediately back racing after claiming his first ever MotoGP win just four days ago.

The 21-year-old claimed his maiden MotoGP victory and Suzuki’s first dry win in 16 years last time out at Silverstone. Whilst some riders would like to sit on their victory and enjoy themselves and their time in the limelight, Viñales however says that he is happy to be right back in action after a historic weekend.

“I’m still enjoying the happiness for my first MotoGP victory and also the first for Suzuki recently,” said the Spaniard.

“The last race at Silverstone has been simply perfect, this as a result of the excellent job we have done as a team. Although I like Silverstone, and I had good feelings for the weekend, winning a MotoGP race is never an easy thing, and it came because both me and the bike have improved a lot, both in this year-and-a-half and also over the weekend in the UK.

“I feel comfortable and confident, my crew and the factory are supporting me with their best efforts and the victory is a reward to our job.

“After such an emotional weekend it is good to go immediately racing again and I will exploit this enthusiasm as a further push in Misano.”

The weather this weekend is expected to be hot this weekend and favour the Yamaha’s and the Ducati’s with the Suzuki’s biggest strength being in the cold conditions. Despite this, Viñales said he is happy to be riding and excited to be racing in front of the partizan Italian fans.

“The circuit is a good one, but also the GP is always emotional for the people and the supporters; last year was an amazing scenario and I hope we will feel the same affection this year.”