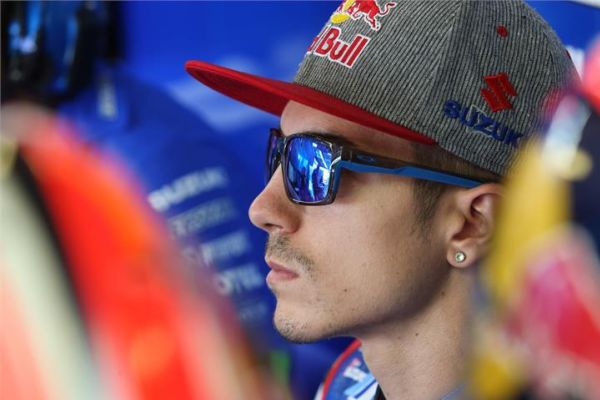 Maverick Viñales was happy with his opening day of free-practice, despite finding himself deceptively low on the timing sheets.

The British MotoGP winner said that he was happy to be back in action less than a week after claiming his historic victory in Silverstone. On the back of winning his maiden MotoGP race, Viñales ended the first day in Misano tenth overall, 0.860 off of Pol Espargaro’s fastest time.

Despite being nearly a second off the pace, Viñales had lap times much, much closer to the top of the timing sheets chalked off immediately for running inches wide in turn thirteen as Dorna attempt to reduce corner cutting with new rules coming in from immediate effect.

On the cusp of Q1, the Spaniard spent the majority of his two opening sessions working on the base pace of his GSX-RR and Viñales said that he is happy with the progress made and data gathered.

“I’m happy with today because we did a very good job, we are utilising the information we collected from the test in Brno and we decided to focus on the pace to finalise the base set-up for the race. Especially in the afternoon I worked mostly with the hard tyre and I felt confident, we improved a lot and also covered the race distance, in the top-10; which means we have a good potential,” said the 21-year-old Spniard.

“Also some of my best laps were cancelled for exceeding the track limit, the truth is that it’s just the exit of a corner where you go on the curb that has been changed this year, but everybody has the same problem and we must adapt to it.

“I also tried a time attack with the soft tyre in the last run but I didn’t feel confident, so we need more time to try it and adapt the set-up. Maybe if I had more time with the soft I could have improved my lap-time also, but this was not our priority for today.

“The job we’ve done leaves me confident that we are in good a condition for the race and tomorrow we’ll be able to focus on the time attack.”