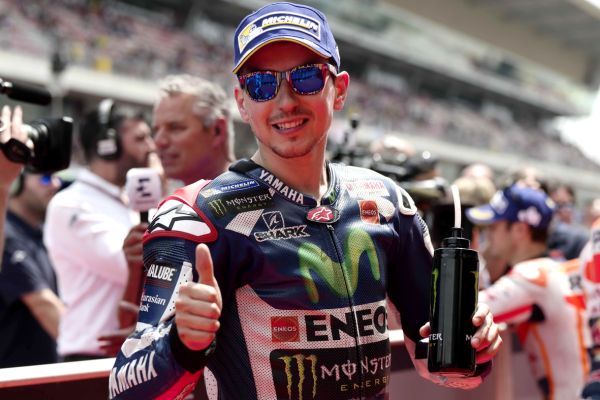 After seeing his World Championship chances drop by the wayside during recent races, however, with the sun shining in Misano, the Spaniard returned to his former self. With red hot conditions, Lorenzo topped the timing sheets the entire session, only improving his lap time further as the session went on.

Lorenzo final fastest lap was a 1:31.868 – the first man to post a lap in the 1:31’s and his lap time was over three and a half tenths faster than second place Valentino Rossi.

Rossi had waited until the second half of the session before moving into the front row positions on his second run. The Doctor – who is sporting a special Blues Brothers helmet just for this weekend – jumped from eighth to second, only to have the lap chalked off for exceeding track limits. Fortunately for Rossi, his very next lap was good enough to bump him into second position.

The two Yamaha riders will be joined by the 2017 Yamaha factory rider Maverick Viñales, who looks to continue his confidence and form from his first ever MotoGP victory in Silverstone last time out.

Marc Marquez will head the second row ahead of the two factory Ducati’s of Michele Pirro and Andrea Dovizioso. Marquez appeared to be struggling with his Honda RC213V and the harsh power delivery that all Honda riders have complained about.

Cal Crutchlow will start from seventh place, just ahead of factory Honda rider Dani Pedrosa and Aleix Espargaro – who suffered a late crash in the qualifying session. Friday’s fastest man Pol Espargaro will start from the fourth row along with Hector Barbera and Alvaro Bautista who couldn’t build on his Aprilia’s first Q2 appearance.