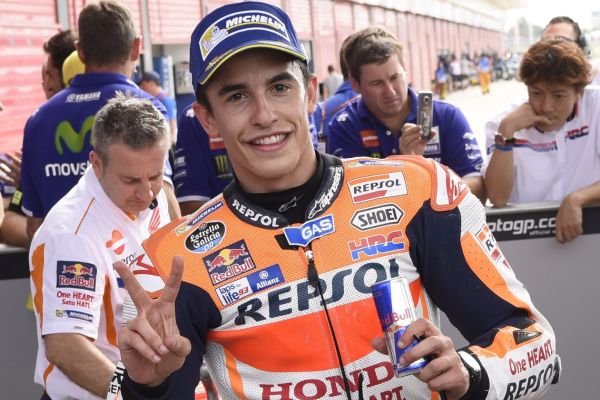 Pole-sitter Marc Marquez has said that the decision tomorrow will be vital if he is to claim his first win of 2016.

Marquez has dominated every session so far this weekend and the qualifying session was no exception to that. However a tyre issue for Pramac Ducati’s Scott Redding has caused tyres to be the topic of discussion in Argentina.

Redding’s rear tyre delaminated and exploded in a similar fashion to Loris Baz’ did in pre-season testing in Malaysia, causing a red flag in proceedings during free-practice four. Michelin spoke to race direction and may end up having to pull their softer option medium tyre for tomorrows race.

Last seasons Argentine race was decided when Rossi caught Marquez when his harder rear tyre came to life and allowed the Italian to catch the Spaniard before the duo clashed, causing Marquez to crash out of the race whilst Rossi went on to claim his second victory of 2015.

If both tyres are made available for tomorrow’s race, Marquez has said the tyre choice will be pivotal.

“I’m happy with how the bike is going and with the pace we have. Tomorrow it will be vital to choose our rear tyre well, because with the soft I feel very good but I do not know if we can use it. We will have to wait for the decision from Michelin,” explained the Spaniard.

After posting his fastest lap in qualifying, Marquez suffered a hard fall into turn one. Despite the crash, Marquez said he felt okay physically and mentally after knowing what the falls were due to.

“We know what my crashes today were due to; the first was down to changing the setup but the second was because we pushed too hard. That is what happens in the qualifying session. Tomorrow we’ll give everything we have in the race.”

After qualifying Marquez was asked by a local journalist if second the man who he clashed with during last seasons race and the man who he will start next to tomorrow, Valentino Rossi, is still his idol after the events of 2015.

“He’s still my idol when it comes to racing and his achievements. But I now look at him with different eyes,” explained the 23-year-old.