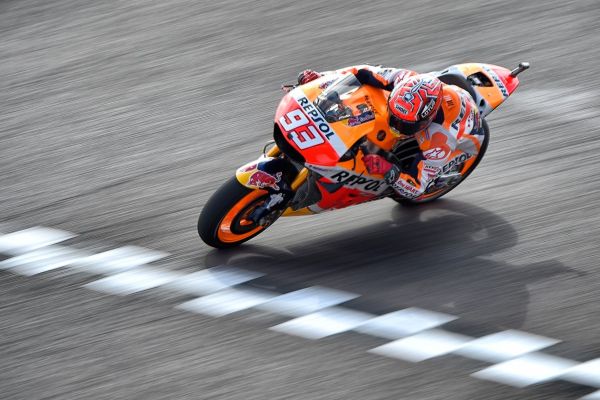 Marc Marquez continued his impressive free-practice pace as he stormed to his first pole position of 2016.

The former double World Champion posted his best lap of the session on his first flying lap, a 1.39.411 meaning he will start on pole position despite later being one of many crashers to fall victim to turn one.

“About the race, we’re working well,” said the Spaniard. “I feel really good on the bike. [For the crash] I pushed a little bit more at turn 1, but overall it’s nice to have this feeling on the bike.”

Valentino Rossi used all of the fifteen minutes of the qualifying session as he just got the better of his team-mate Jorge Lorenzo, who himself was fairly pragmatic about his chances after starting on the front row after ending this first day of practice down in 14th position.

“Last year the qualifying was very bad but the race was fantastic,” said the Doctor. “We had a good qualifying [session]. The track improved a lot today and I have good pace.

“Marquez will be hard [to beat] but the important thing is to fight for the podium. We need to wait for Michelin’s decision to decide which tyre to use.”

Dani Pedrosa will head the second row ahead of the two Factory Ducati’s of Andrea Dovizioso and Andrea Iannone who’re fifth and sixth respectively.

Maverick Viñales was disappointed to head the third row ahead of Hector Barbera and Cal Crutchlow. The Tech3 duo of Pol Espargaro and Bradley Smith made it through qualifying one, but will be split on the fourth row by Aleix Espargaro.