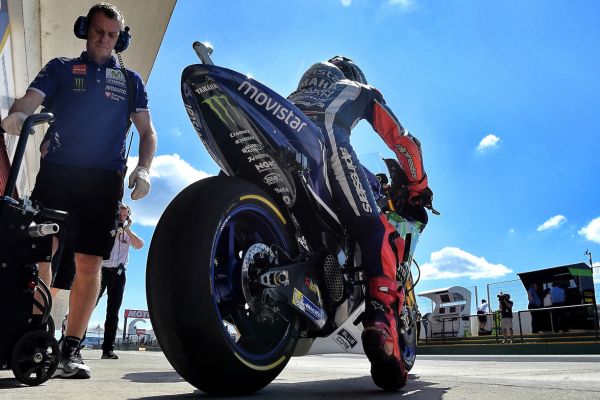 World Champion Jorge Lorenzo was feeling content with his qualifying performance after a disastrous first day in Argentina.

Lorenzo ended the first day of practice in Argentina fourteenth fastest overall, struggling to get the power down with his Yamaha M1 with the track providing little to no grip.

Today however, Lorenzo managed to find some grip and get his Yamaha performing in a more reasonable fashion. Lorenzo did what he needed to do in free-practice three getting into the top ten, ending the session less than a tenth behind Marquez’s best time. Lorenzo then suffered a fast crash when he lost the front end of his M1 into turn one towards the end of free-practice four, totally writing off his number one bike in the process.

The Spaniard will start tomorrows race from third position after being nudged out of second place in the dyeing embers by his team-mate by less than two tenths of a second. Lorenzo’s best time of qualifying was a 1’39.944, half a second slower than the pole position lap time set by Marc Marquez.

Despite being half a second off the pace of Marquez, Lorenzo was in a pragmatic mood after qualifying and happy to be on the front row.

“Today we got a better day overall and we could make some important improvements with the set up and especially the track improved a lot so we had a very good first session,” explained the Spaniard.

“Unfortunately in the afternoon during FP4 a tyre issue put the session on stand by, due to the red flag and after that I crashed so we lost the opportunity to swap the bikes in the qualifying.”

“Despite this the first row was the main goal and we were able to achieve it so I’m quite satisfied. I think we are ready to fight,” he said.

All of the riders will be given an extra half an hour warm-up session tomorrow morning prior to the first Moto3 morning warm up session, alongside the usual twenty minute warm-up session in a effort to find a set up for the new medium tyres being provided by Michelin for tomorrows race, something Lorenzo described as a very strange situation.

“It’s a very strange situation that I‘ve never encountered before. Unfortunately we had some issues in the recent past and it‘s definitely not a comfortable situation for the riders and the teams, but things are like that,” explained Lorenzo.

“I have great respect for Michelin and for the efforts they have put in these last few months to improve the 2016 tyres. Even considering this last inconvenience, I‘m sure they will keep on working because safety is the first priority in racing.

“Tomorrow the race will be extremely difficult. We‘ll have to start from zero but at least this is the same for all riders. Let‘s see how it goes tomorrow morning.”